There’s something irresistible about pop music. Every few months, a song is born that transcends cultural differences and plants itself into our minds. Many of us manage to resist the allure of pop through indifference or stubborn determination. Among the humpback whales, however, keeping up with the latest musical fads is a matter of survival.

Humpback whales use their immense bodies as resonating cavities to produce a truly impressive vocal range. A single male has a range wider than any human choir. They can sing from two octaves lower than a bass singer, to three octaves higher than a soprano. This whale choir broadcasts across the ocean, their songs travelling along for thousands of kilometers. Only the males sing, and they do so only during breeding seasons, suggesting that it plays an important role in attracting a mate.

And just like the songs that we listen to, the songs of the humpback have a precise musical structure. They can be broken into separate themes, each of which contain a number of phrases. Each phrase in turn contains a series of notes, ranging from chirps, bleeps and squeaks that sounds like something from a science fiction movie, to more gravelly grunts and a kind of deep, majestic roar. (Audio samples below)

One surprising fact is that within a population, all the males conform to the same song. They are remarkably consistent, singing out the same themes in precisely the same order. The biologist Richard Dawkins coined the phrase meme to describe a unit of cultural information that can be inherited and modified, echoing the idea of a gene. The word is now commonly used to describe internet memes - videos or ideas that explode in popularity and inspire imitation.

Research by Ellen Garland and her colleagues[1] show that a similar kind of cultural transmission is taking place in the aural world of the humpback whales. Just as a catchy song or a youtube video inspires many offshoots, they found that these whale songs are also being borrowed and adapted. 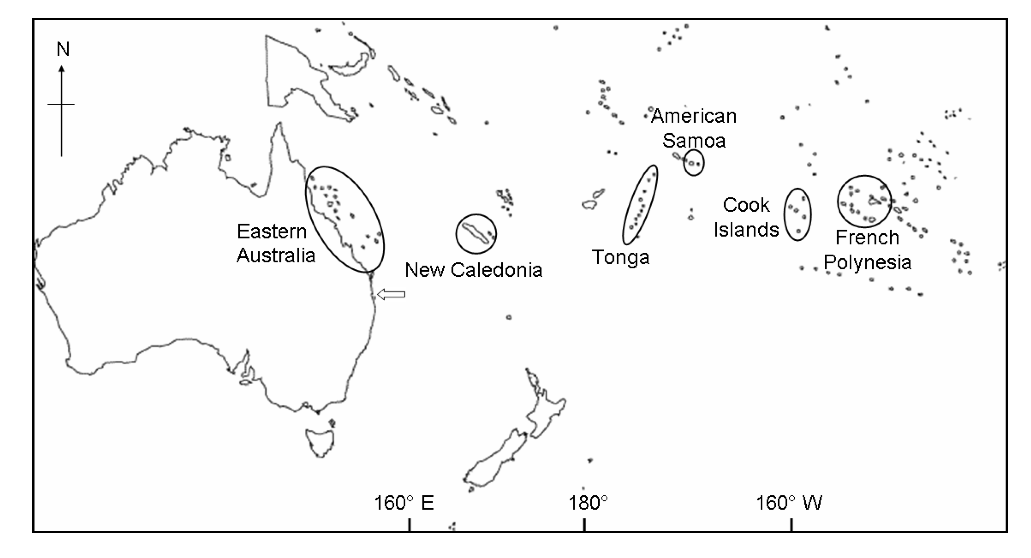 For 10 years, every breeding season they recorded the songs of different groups of humpback whales along a line of Pacific islands stretching from the Eastern coast of Australia to French Polynesia. They classified theses songs into different color types (red, blue, green, etc.), which represent fundamentally different whale songs. The different shades of each color (dark, light) represent songs that are still basically the same, with a few modifications.

For example, this is what dark red sounds like:

And this is blue:

The results of 10 years of such recordings are summarized in this figure: 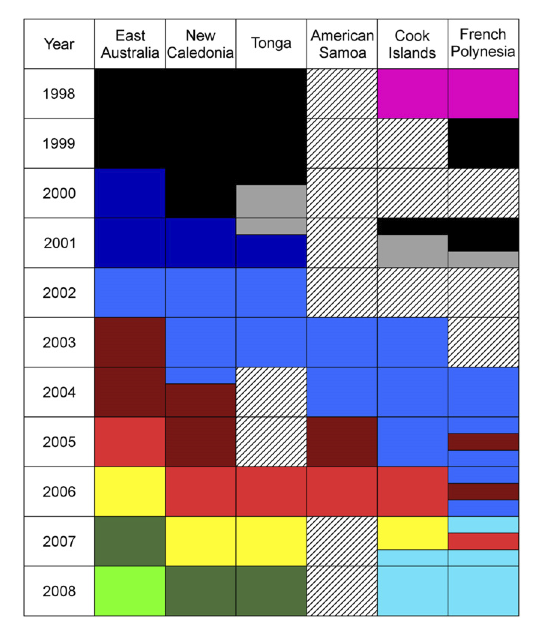 The columns correspond to locations, arranged from west to east. Every row is a successive year.

What you see here is that over time, these songs are migrating towards the east, all the way from Eastern Australia to French Polynesia. For example, the blue song evolves from dark blue to light blue to cyan. And this migration of song can take place in just 4 or 5 breeding seasons. The distance is quite impressive - it is one fifth the circumference of the globe. An aircraft following this route would take over 8 hours to make this journey. The authors describe this transmission as “cultural waves” that ripple towards the east, at a scale and speed that is “unparalleled” in the animal kingdom.

But groups of humpback whales rarely interact. So the question arises, how are these songs moving? It could be that just a few individuals made their way over, and their song caught on in the new group[2]. Or it could be that the migration routes of these whales bring them close enough to each other for songs to catch on.

The answer to that question would explain another strange feature of the data. Compare 2002 and 2003 in the figure above. You’ll see that the East Australian humpbacks have suddenly adopted a completely new song, with no traces of similarity. Michael Noad and colleagues[2] showed that a similar “cultural revolution” took place in the same group of whales, back in 2000. It turns out that a new song had been brought to Australia by a few “immigrants” who crossed the oceans, travelling all the way from the Indian Ocean. Within a year, it had entirely been adopted by the local population. These catchy tunes are broadcasting whale culture on a truly global scale.