An eyeless Mexican cavefish. If you think it looks sleepy, read on.

This post has been submitted to the NESCent Evolution Blogging Contest

Out of the approximately 3 billion letters of DNA that make up your genome, there are about a 100 letters that neither of your parents possess. These are your own personal mutations. The machinery that copies DNA into new cells is very reliable, but it is not perfect. It makes errors at a rate equivalent to making a single typo for every 100 books filled with text. The sperm and egg cells that fused to form you carried a few such mutations, and therefore so do you.

Every child who grew up watching cartoons like X-men or the ninja turtles associates mutations with superpowers. But the sad reality is that, somewhat like a double edged sword, mutations are more likely to hurt you than do any good. Imagine if you were to change a few letters at random in a book. Chances are, you are not improving the story. A typo doesn’t usually do much. It’s easy to overlook and doesn’t change the essential meaning of a sentence. This is the idea of the neutral theory of evolution, that most mutations have little or no effect on the organism. While this may be the case, the rare events pack quite a punch. Beneficial mutations are rare, but they are the only road through which organisms become better adapted to their environments.*

Changes to DNA are more likely to be disruptive than beneficial, simply because it is easier for changes to mess things up than to improve them. This mutational burden is something that all life forms have to bear. In the long run, individuals that carry harmful mutations will, on average, produce fewer offspring than their peers. Over many generations, this means that the mutation will dwindle in frequency. This is how natural selection is constantly ‘weeding out’ disruptive mutations from our genomes.

There is a flip side to this argument, and it is the story of the blind cave fish. If a mutation disrupts a gene that is not being used, natural selection will have no restoring effect. This is why fish that adapt to a lifestyle of darkness in a cave tend to lose their eyes. There is no longer any advantage to having eyes, and so the deleterious mutations that creep in are no longer being weeded out. Think of it as the ‘use it or lose it’ school of evolution.**

A world without light is quite an alien place. There are many examples of fish that live in completely dark caves. Remarkably, if you compare these fish to their relatives that live in rivers or in the ocean, you find that the cavefish often undergo a similar set of changes. Their eyes do not fully develop, rendering them essentially blind. They lose pigmentation in their skin, and their jaws and teeth tend to develop in particular ways. This is an example of what is known as convergent evolution, where different organisms faced with similar ecological challenges also stumble upon similar evolutionary solutions.

The changes mentioned above are all about appearance, but what about changes in behavior? In particular, when animals sleep, they generally line up with the day and night cycle. In the absence of any daylight, how do their sleep patterns evolve?

A recent paper by Erik Duboué and colleagues addressed this question by comparing 4 groups of fish of the same species Astyanax mexicanus. Three of the populations (the Pachón, Tinaja, and Molino) were blind cavefish that inhabited different dark caves, whereas the fourth was a surface-dwelling fish. 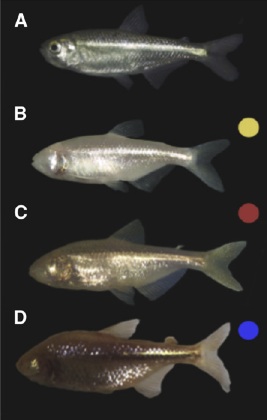 Three blind fish. A is the surface-dwelling fish with eyes. B, C and D are the Molino, Pachón and Tinaja populations of eyeless cave-dwelling fish

The authors defined sleep for their fish to be a period of a minute or more when the fish were not moving. They checked that this definition met the usual criteria. Sleeping fish were harder to wake up (it took more pokes to elicit a response from them), and fish that were deprived of sleep compensated by sleeping more over the next 12 hours (these are both situations that any college student is familiar with).

The above figure from the paper summarizes their main result (click to enlarge). The black and white bars at the bottom are day and night, and the dots shows the fraction of time that the fish spend asleep. The black graph represents the surface fish. Like us, their sleep peaks at night and they are awake during the day (except for their mid-day nap). In comparison, all the cavefish populations (red, yellow and blue) get very little sleep. Their total amount of sleep has gone down dramatically, by a factor of 10 (see figure below). In fact, each cavefish population included many fish that did not sleep at all during the length of the study. 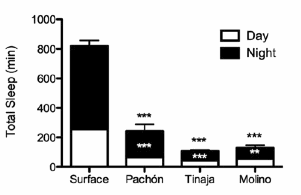 The researchers also tracked the speeds of all the fish, and found that, while they were awake, the cavefish moved faster or just as fast as the surface fish. This means that it’s not that the cavefish are constantly sleep deprived and in a lethargic, sleepy state. They are just as wakeful as the surface fish (if not more so), and genuinely need less sleep. These three cavefish populations all evolved independently, and yet they have converged on remarkably similar sleep patterns.

To study the genetics of this phenomenon, the researchers cross-bred the surface fish with the cavefish. The cave dwellers and surface fish all belong to the same species, which means that they can have viable offspring. They found that the mixed offspring (Pachón x surface and Tinaja x surface) had a reduced need for sleep that was indistinguishable from that of their cave-dwelling parent. Thus sleep reduction is clearly a genetic trait, and it is a dominant trait (Dominant traits are present in the offspring if they are inherited from just one parent. A recessive trait, on the other hand, will only be present if it is inherited from both parents.)

The scientists also checked that the reduction in sleep was independent of other characteristics of the cavefish, such as the size of their eyes or the presence of pigmentation. This means that sleep loss did not co-evolve with these other traits, but is an independent evolutionary event.

There are still many big questions to be answered. What is the driving force behind sleep reduction? It may be that sleeping less is beneficial to the cavefish, but there’s not yet any evidence to support this. The evolution of sleep and the role it plays in animals is still quite an open mystery. I imagine that the next step in this story would be to work out how the sleep loss evolved, by looking at the DNA sequences of these cavefish and tracing down the specific mutations and genes involved.

Unlocking the secrets of sleep is inherently cool science, and it also has the potential to help people suffering from sleep disorders. Who knows, it may even lead to the superpower of doing away with sleep altogether (though I’m quite sure that some of my fellow bloggers already have that covered).

Footnotes *I am talking about mutations loosely here, sweeping things like copy number variations, insertions, deletions and point mutations all into the same category. **In fact, possessing eyes in a world without light may even be a hindrance as eyes are vulnerable to infection. It would then be an adaptation to lose them.

Image Credit The topmost image of _Astyanax mexicanus _is taken by Joachim S. Müller and is licensed under Creative Commons.

If you enjoyed reading this post, you may like some of my other articles on evolution: Why have sex? To fight parasites, of course! Flies alter their ejaculate to get the best bang for the buck Why moths lost their spots, and cats don’t like milk. Tales of evolution in our time When nice guys finish first: a lesson from tiny robots