In the children’s game of hide-and-seek, it doesn’t matter much whether you win or lose. In the animal kingdom, however, the stakes are significantly higher. If you’re found, you’re food.

And death is not just the end of the individual, it’s the end of a lineage. Organisms that die before they can reproduce deny their genes a road to the next generation. In this simple fact lies the engine of change. For example, genes that make a prey more camouflaged will end up increasing their reproductive success, whereas genes that make them more noticeable are not going to get very far. In this way, natural selection is driving prey to become better hiders, and predators to become better seekers.

Nowhere is this evolutionary race more evident than in the case of the peppered moth. This is a species of moth that is found all across England and Ireland. When people first studied them in the early 1800s, almost all the moths looked something like this: 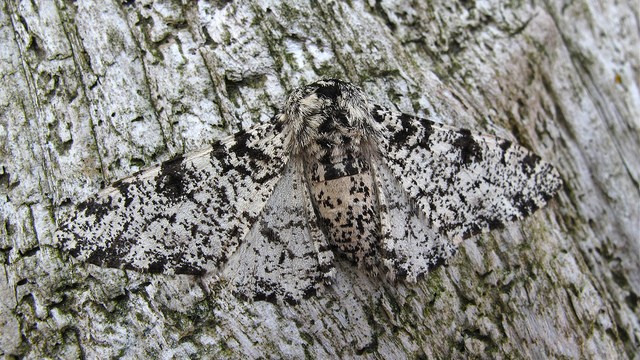 As you can see (if you’re looking closely), the white and black speckles are effective camouflage. For ages, these moths have hidden on light colored trees and lichens. Over time, they have evolved this distinctive pattern to help them evade the notice of the birds that prey on them.

But just fifty years later, things were beginning to change. By the 1850s, moths of the same species had stumbled upon a new color. These new moths were called carbonaria after their carbon-black color, to distinguish them from their salt-and-pepper colored relatives with the dull name typica. 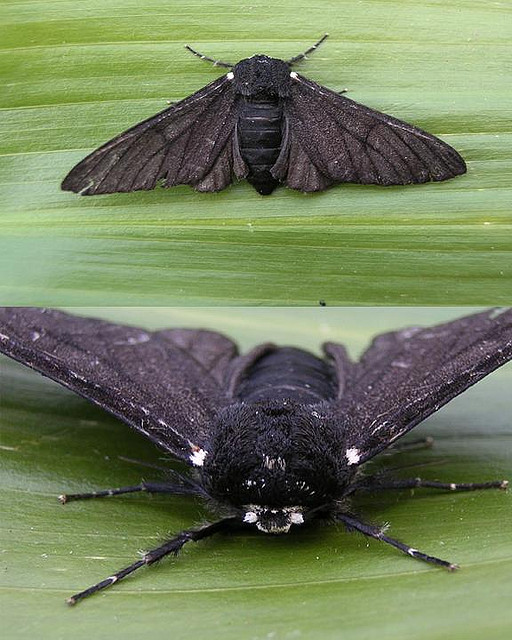 By the end of the nineteenth century, the change was drastic. In 1895, a study in Manchester showed that 95% of the peppered moths were now of the black type. So what was going here? What could cause such an incredible change in appearance in just a hundred years?

They key lies in a major event in the history of humanity that took place during the nineteenth century - the Industrial Revolution. During this time, a large number of factories were being built in England, and they burned a mind boggling amount of coal. From 1800 to 1900, annual coal production went up in the UK from about 10 million tonnes to 250 million tonnes.

This had a drastic effect on the environment. The trees in the woods between Manchester and London were covered in soot. And the increased levels of sulphur dioxide was killing the lichen. All of a sudden, the peppered moth was losing its camouflage. It stood out like a sore thumb against the sooty black barks of the trees, while the rare black form of the moth became an instant success.

In a new study in this week’s issue of the journal Science, researchers in Liverpool and the Czech Republic were able to trace down the genetic signatures of this extreme evolution. They did this by looking at the variation in letters of DNA between the 2 types of moths.

At the heart of the idea is sex. The genetic role of sex is to shuffle together different genomes in a population. This has the effect of creating more types of genomes, and thus increases diversity.

When the Industrial Revolution comes along, it paints the world of the moth black. Most of the genomes in the population get wiped out as they are no longer fit. A few rare ones contain a gene that protects their possessor by coloring them black. These genomes quickly begin to dominate in the population, and so there are now fewer kinds of genomes around - the diversity begins to plummet (think of 1895, when 95% of these moths were now black). This is known as a selective sweep, where a set of genes rapidly sweep through a population.

Over time, as these moths mate with others, the diversity builds back. **But just as it takes many shuffles to completely randomize the order of cards in a deck, it takes many generations of sexual reproduction before all trace of the past is lost in the genome. By tracing down regions of the genome with unusually low diversity, we can uncover the signals of natural selection that must have acted on our ancestors. **This method of detecting natural selection works best if the selection was strong (so that it wiped out the diversity), and if it happened recently (so that sex hasn’t had enough time to bring the diversity back).

This is just what the authors did. They first compared the genomes of 68 typica and 64 carbonaria moths (the offspring of two pairs of parents) and found that a particular region on one of the chromosomes was responsible for the difference in moth color. But this is a coarse-grained picture, as the region that they identified is over a million letters in length. The next step was to probe the diversity at a finer scale. 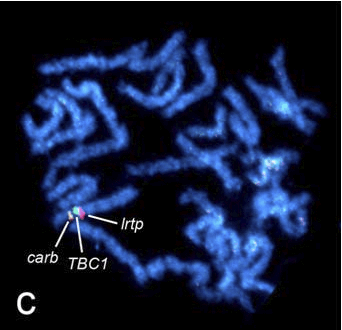 Making DNA glow. This is an actual image of the 31 chromosomes in a sperm cell of the moth. The region identified as causing the black color of carbonaria is made to glow yellow (labelled carb). Image taken from the paper.

To do this, they looked at 6 variant letters of DNA that were spread out in this region, and measured how the carboneria and typica moths vary with respect to these letters. At each of these positions, there are 2 possibile letters that any moth can have. So if the genomes were properly shuffled with the maximum level of diversity, there would be  64 possible possible 6 letter words that could be formed here.[1] The spotted moths were found with many different words in this region, a sign of diversity. The black moths, on the other hand, all had small variations from just one sequence: CAGGTA. The scientists inferred that this must be the ancestral sequence of the black moths that thrived in the Industrial Revolution.

By comparing our DNA, we are actually looking back in time. We can use these techniques to infer the pressures that our distant ancestors faced. A cool example of this kind of DNA archeology is the story of lactose tolerance in humans.

Here’s a counter intuitive fact - mammals typically can not digest milk in adulthood. Of course, all mammals love milk as infants (that’s what gives them their name). That’s because they can produce a chemical called lactase, which breaks down the lactose in milk. But once infants reach the age of being weaned, the body switches off production of lactase. We all like to think of cats as cute pets that love a saucer of milk, but in reality this is more likely to give them indigestion and diarrhea. Lactose intolerance is not a disease, it’s actually the norm. 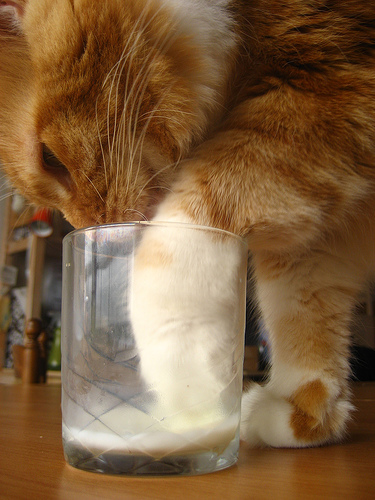 I don’t think so, kitty.

This makes sense from an evolutionary point of view. Milk is a nutrient rich food for infants, but it is costly for a mother to produce. At some point, the growing infant needs to move on, or it will become too great a burden for the mother. This digestive ‘switch’ in mammals ensures that this happens.[2]

So why is it that some us can digest milk? The answer takes us from one cultural revolution to another, to a time  8000 years ago when some of our ancestors had begun to rear cattle. This was happening in the Middle East and in Africa. Through sheer chance, anyone who had a mutation that disabled this lactase switch suddenly had an advantage over their peers. They had access to a reliable and nutrient rich source of food - milk from cattle. 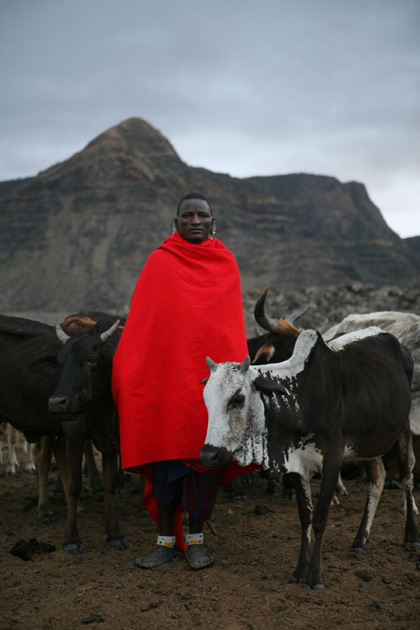 In the Maasai tribe of East Africa, wealth is measured in the size of their herds. Owning only 5 cattle makes this male, Kamaika Kingi, a poor man.

The same process that changed the color of the moths is at work here. As was shown by a team led by Sarah Tishkoff in 2006, cattle herders in Africa and in the Middle East independently evolved different mutations that allowed them to drink milk, an example of what is called convergent evolution [3]. This is why lactose tolerance is very prevalent in Europeans. Many of their ancestors were cattle herders who originated in the Middle East. Similarly, northern Indians are more likely to be able to digest lactose than southern Indians, perhaps due to closer contact with the pastoral Sindhi tribes of north India.

And those of use who can digest milk carry the signs of this cultural revolution in our DNA. To date, the region surrounding the lactase gene has a remarkably low diversity in populations that descended from cattle herders.

We usually think of adaptations as occurring in response to changes from within nature. But I find it fascinating that our culture can also be a driving force of evolution. It has happened time and again, without our explicit knowledge of it. During the dawn of agriculture, we evolved wild grains into harvestable varieties like wheat and rice. In the birth of pastoralism, we modified our cattle to produce more milk, while also evolving ourselves to be able to consume it. And in the Industrial Revolution, our pollutants ended up driving evolution in moths.

As we look further out into space, we learn more about the origins of our universe. But at another extreme, by looking inwards to our DNA, we are also learning more about our place in it. We are unraveling the lives and cultures of our prehistoric ancestors, as well as the effect that we have had and continue to have on our surroundings.

Incidentally, the story of the moth has another surprising twist. Eventually the air quality improved in the UK, and the lichen began to grow back. The trees were restored to their lighter colors. And this meant that the carbonera moths have once again started to get noticed. They are now at a great disadvantage and have become extremely rare. In this way, the ebb and flow of genes are echoing the waves of cultural changes.

The times they are a-changin’. As the trees grow free of pollution, natural selection favors the lighter typica moth once again.

The kind of evolutionary genetics discussed in this article is the subject of my research. I have spent the last year and a half working on a project that studies how certain African pastoral tribes have evolved protection to their extreme diets, a case of culture and gene flow being intricately woven together.

[1] There are 2^6 =  64 combinations in all. The reason for there being 2 possible letters at these variant locations and not the usual 4 (A, C, T and G) has to do with biology. The variants arise through mutations (for example, an A gets flipped to a T) in somebody. It is incredibly unlikely that two mutations in the recent past (say, A to T and A to C) will occur at exactly the same place.

[2] However, if this lactase disabling switch was only useful to the mother, than it wouldn’t evolve. But such a switch also benefits her genes, as she can now invest the resources that she gains on caring for her offspring or on rearing more children.

[3] Incidentally, the peppered moth also occurs in North America, and there are reports that a similar adaptation towards darker moths arose along with the rise in pollution in the nineteenth century. If true, than this is another neat example of convergent evolution.