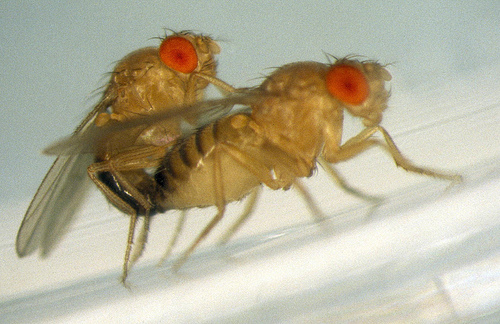 Smarter than you think..

Sex is war. It’s a battle for limited resources.

The source of sexual conflict is this: sperm is a relatively cheap resource for males to produce, whereas producing eggs and rearing offspring is a much larger investment on the part of the female. Darwin was the first to realize the implications of this. He reasoned that this imbalance should result in males competing with each other to fight for the limited resource, and females exerting a strong choice on who to mate with. Taken together, male competition and female choice were the two pillars of the theory that he called sexual selection.

The battle of the sexes is not a new idea, but it has changed with the times.

In the 1960s and 70s, the sexual revolution was eroding away conservative ideas about sex. This was the era of promiscuity. And this changing social fabric was being mirrored in science. The ‘free love’ era brought about an equally potent, but more silent, revolution within biology - one that completely shook up our old, prudish notions of reproduction. Research from these decades onwards taught us that in almost all animals, from insects to birds and mammals, females typically copulate with multiple males. We learned that promiscuity is not a freak event, it’s actually the norm. What this implies is that, like any modern war, the battle of the sexes is a messy and involved affair, often leading to surprising and unexpected consequences.

For one thing, it’s being fought on many fronts. In many species, competition between males for the egg doesn’t stop at intercourse. Even after the female is inseminated, the battle rages on inside her reproductive tract. In this alien battlefield, the sperm cells of different males compete with each other to fertilize the eggs. Meanwhile, the reproductive organs of the female can still exert control by choosing between the different sperm.

And just like the Greeks who sneaked into Troy, the soldiers in this battle use every trick at their disposal to gain an upper hand. Some males do the equivalent of taking their ladies out to a fancy restaurant - they present females with a nutritious meal in their sperm, at substantial cost to themselves (delightfully, biologists call this a prenuptial gift). Others resort to date rape - their sperm includes a harmful cocktail of drugs that alter the females’ behavior in their favor. Even more chilling, there are species in which the males engage in traumatic insemination, where they essentially rape the females. Other males are just outright weird. Some leave their penis behind to plug the vagina from use by other males. Others have smelly sperm that repels other males. And others have spiky penises, that scrape the vagina clean of the sperm of competitors. 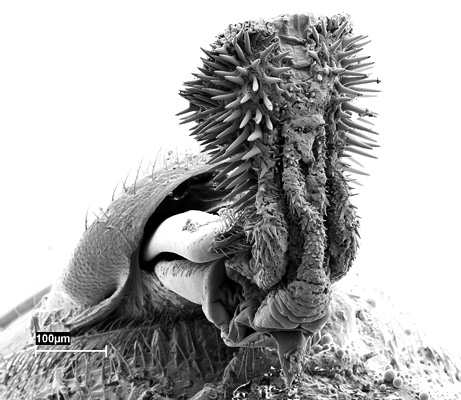 Not a pleasant lay. That thorny structure is the penis of a bean weevil.

In this evolutionary arms race, the females are not passive bystanders. They play an active role, by evolving counter defenses, and by choosing between different sperm in their reproductive tract. A striking example of female reproductive choice arises in the case of ducks. Duck sex is typically forced by the males, and the females have evolved fake vaginas into which they can channel the penis of an unsolicited male. The author Carl Zimmer describes this sexual tension in remarkably eloquent prose:

"My tale is rich with deep scientific significance, resplendent with surprising insights into how evolution works, far beyond the banalities of “survival of the fittest,” off in a realm of life where sexual selection and sexual conflict work like a pair sculptors drunk on absinthe, transforming biology into forms unimaginable." 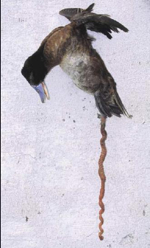 Strange new twist? The arms race for reproductive control has given rise to

And nowhere is this sexual conflict between sperms and eggs more thoroughly understood than in the humble fruit fly. A new experiment published this week by Laura Sirot, Mariana Wolfner and Stuart Wigby at Cornell University introduces a strange new twist to this story.

Here’s the story so far. Fruit flies have long been an experimental workhorse of bench biologists, not least because of their incredibly efficiency at laying eggs. It’s known that male fruit flies include in their semen a cocktail of chemicals that improve their reproductive success. There are chemicals that cause the female to lay more eggs. Others that woo the female into storing more of the sperm. Some chemicals are like a key - they get the female to release the sperm from the storage vault inside her. And some dull her sex drive, making the female temporarily less interested in mating with subsequent males.

The researchers focused on the main chemicals in semen that stimulate egg production in females. One of these chemicals is called sex peptide, and it has the effect of boosting egg production for more than 3 days. It also temporarily makes the females less receptive to the advances of other males.

In the first experiment, they took female flies who had already mated once, waited for a day, and mated them with a new fly. These new mates were of two types - they either had sex peptide in their ejaculate, or they were genetic mutants who could not produce this chemical. By comparing these two groups, the researchers could establish the effect that sex peptide had on females that had already mated. As a control, they also looked at females who only mated once. Their results are summarized below: 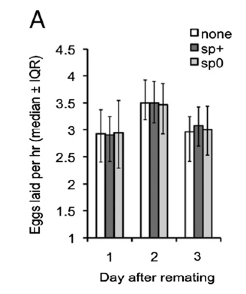 The white bars are the females who did not remate, the dark and light grey are the females who mated with males with and without sex peptide, respectively. What the figure shows is that the second mating had no effect on the number of eggs being laid by the female (the white and grey bars are no different). The chemical cocktail of the first male had already pushed her eggs to a maximum number, and additional dosage of the chemical had no effect on the size of her clutch.

Now imagine the plight of the tiny male fruit fly. It faces fierce competition from other flies, and will use any trick that it can to get ahead. The above figure suggests that if a male fly comes across a female that has already mated, then it’s in his interest to ‘switch off’ production of chemicals that boost egg production. After all, she’s already been pumped a full quota of this chemical, so producing any more is a waste.

However, if the fly does away with sex peptide, he faces a disadvantage. You see, this chemical didn’t change the number of eggs laid by the female, but it did have an effect on her behavior. It still makes her less receptive to other males. You can see this in the following figure (SP+ are males with sex peptide, SP0 are males without). 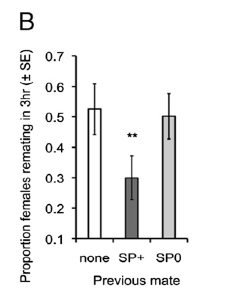 There is a way out. **If it produces any chemical whose only effect is to boost the number of eggs, than it should make less of it when mating with a female who’s already got some. **

The researchers predicted that a chemical called ovulin - the other main ingredient of this drug cocktail - should fit the bill. They argued that since flies can discern whether a female has already mated, it is in their interest to reduce any unnecessary ingredients in their ejaculate. Just like balancing a budget, it’s all about optimizing expenses and minimizing wastage.

They tested their prediction by comparing the volume of these chemicals produced by males in both cases - first encounters, and repeated matings. Here is what they found: 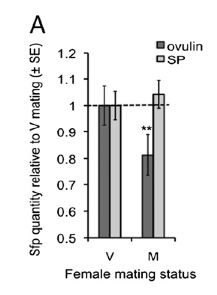 In the figure, V represent matings with virgin females, and M are matings with females who have mated before. The results are in complete agreement with their predictions. When males are not ‘the first one in’, they reduce their production of ovulin, but not of sex peptide. They are effectively tuning the ingredients of their ejaculate to take advantage of their competition.

This is a cool new result, for a couple of reasons. Sperm competition had already pushed the battle of the sexes into the female reproductive tract. But this result shows a new kind of sophistication to this war - ejaculate espionage.

And it also leads to new questions. The mechanism by which flies can alter the contents of their ejaculate is entirely unknown. And no one knows whether males of other species can also repackage their sperm.

Darwin would have been thrilled to see his insight being applied to this virgin territory.

If you’re interested in the subject of sexual conflict and sperm competition, here are some great reads:

Dr. Tatiana’s Sex Advice to All Creation by Olivia Judson

and you should definitely listen to the Radiolab episode on Sperm

The genitalia of the Callosobruchus analis beetle by Johanna Rönn, Department of Animal Ecology, Uppsala University. Licensed by Wikimedia Commons.

Figures were taken from the referenced paper, as always.