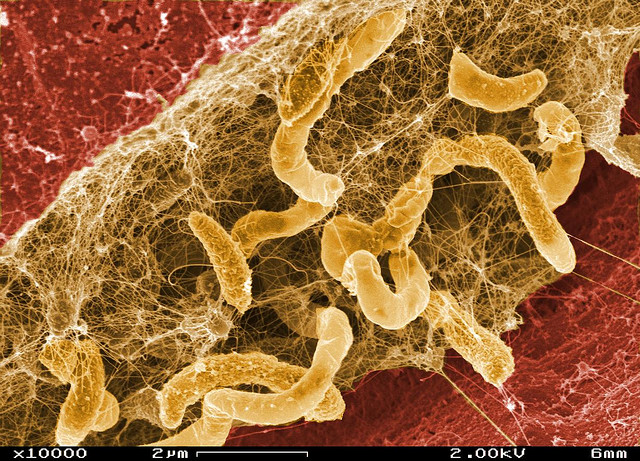 Bacteria have busy social lives. You might get a glimpse of this the next time you take a shower. The slimy discolored patches that form on bath tiles and on the inside of shower curtains are the mega-cities of the bacterial world. If you zoom into these patches of grime, you’ll find bustling microcosms that are teeming with life at a different scale.

That we can see these microbial communities with our naked eye is testament to the scale of their achievement. Perhaps the most spectacular examples are the giant mats of bacteria that lend life to the Grand Prismatic Spring in Yellowstone National Park. These macroscopic structures are just as impressive as our cities that are visible from outer space. Microbes have colonized practically all moist surfaces on earth, from the inside of our mouths (they’re responsible for dental plaque) to hot vents at the bottom of the ocean. And it all started from small beginnings. 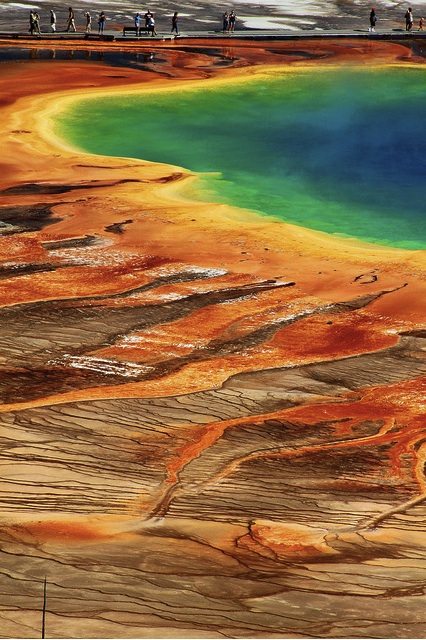 Grand Prismatic Spring, Yellowstone National Park, USA. The people above give a sense of the scale. (Image credit: Leto-A)

The first wave of bacterial settlers that arrived on your shower curtain were few and far apart. They would try to hold on using the molecular adhesion between themselves and the shower curtain. Those that couldn’t get a grip were flushed down the drain plug.

Bacteria have an adaptation that serves them well in such tricky situations. It’s a sort of multi-purpose prong, technically known as a type IV pilus (plural: pili). These wonderful filament-like structures extend out from the bacteria, and grab on to the surface like a suction cup on a bathroom tile. What happens next is straight out of science fiction. 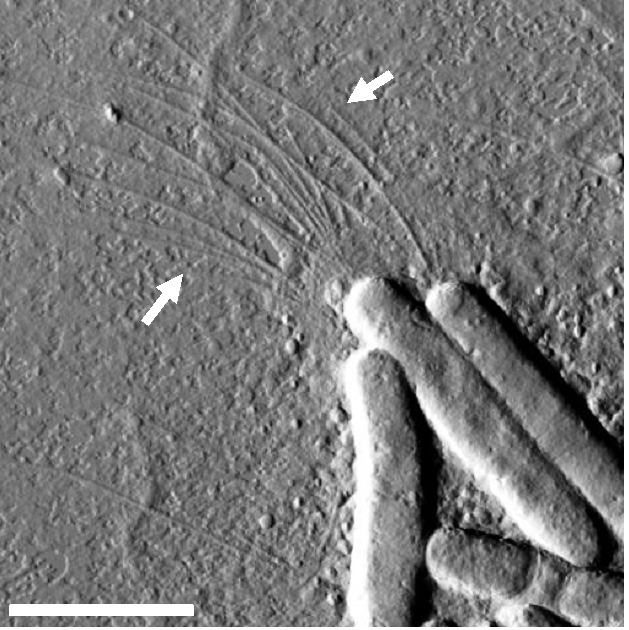 Once these settlers have their ‘feet’ firmly planted on the ground, the next step is to build a home. They begin to excrete a polymer substance, forming a grid that locks them into place. Many different microbes can co-inhabit these homes, from bacteria and archaea to protozoa, fungi and algae. Each species performs a specialized metabolic function, neatly occupying a niche in this city. Together these interlocked communities, or biofilms, are the beginnings of a thriving multicultural microbial civilization. 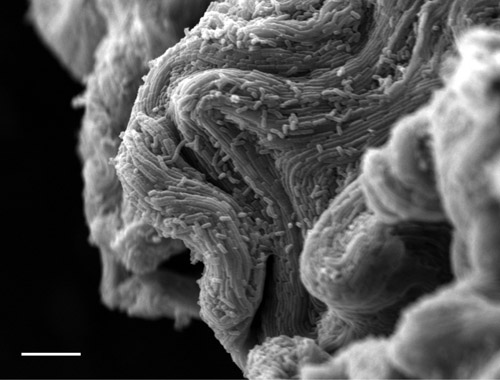 Why do bacteria congregate into cities? It’s basically for the same reasons that we do. By collecting together in large numbers, they can more effectively share resources. The grid offers them protection from antibiotic enemies, and helps them share resources. Some biofilms even have their own utilities and telephone system (that’s right, bacteria can talk). These grids have water channels running through them, which the bacteria use to share nutrients and send signals to each other.

But as city dwellers are well aware, moving to the grid comes with its disadvantages. The bacteria pay a price in mobility - their cities have no public transportation. It’s hard enough for bacteria to move in water, and being embedded in an organic glue makes matters considerably worse. Their winding propellers, the bacteria flagella, are of little use here. 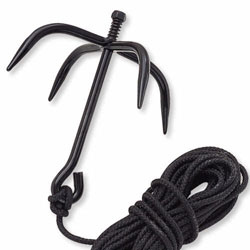 However, the bacteria have a clever way out. Their pili (the hair like appendages pictured above) are more than just suction cups. They can also work like a grappling hook. The bacteria shoots them out to hook onto the surface, and then reels itself in. By repeating this motion, it can slowly crawl across the biofilm in a lengthwise motion that biologists delightfully refer to as twitching.

Here’s a video that shows bacteria (Pseudomonas aeruginosa) twitching along a surface as they keep dividing:

and a slowed down version of the same process:

You can see that the motion is jerky, because the bacteria are using their pili to pull themselves forwards or backwards. This crawling strategy was widely accepted as the explanation for how bacteria move in a biofilm.

But there were always some pieces that didn’t quite fit. Scientists knew that bacteria can sometimes make sharp turns, but they never quite understood how. The grappling hooks are mostly in the front and back of the bacteria, and aren’t much use for turning.

In an innovative solution to this problem, some bacteria instead use their pili like a walking stick. Rather than pulling themselves forward, they prop themselves up from the ground, stand upright and flop over. By repeating this motion, they can walk across the terrain. You can watch this strategy at work:

These walkers are not as energy-efficient as the crawlers, but they can move faster and are more meandering, both good ideas if you want to quickly explore new territory.

And a recent paper published by scientists from UCLA and University of Houston adds a new twist to the story. Fan Jin and colleagues describe an experiment where they track the motion of the bacteria Pseudomonas aeruginosa, the star of the twitching videos shown above.

They recorded videos of these bacteria moving under a microscope, and used software to track the positions of the two ends on their rod-shaped body. This process looked something like this:

Near the end of the video, you can see the bacteria make sideways leaps.

By analyzing this motion over many steps of the bacteria, they discovered a consistent pattern to the data. The following figure from the paper shows the horizontal and vertical position of the bacteria, as it crawls along the surface. 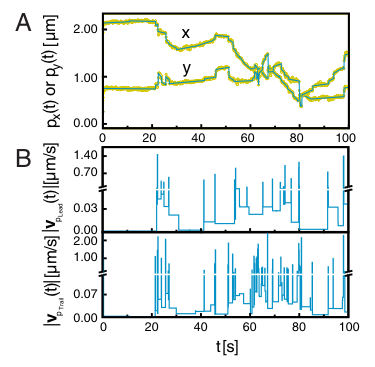 From the data, they worked out the speeds of the leading and trailing ends of this bacteria. You can see this plotted as the blue skyline in the figures above. What it shows is that the bacteria are constantly switching between short, furiously fast bursts of motion, and slower, more methodical crawls. 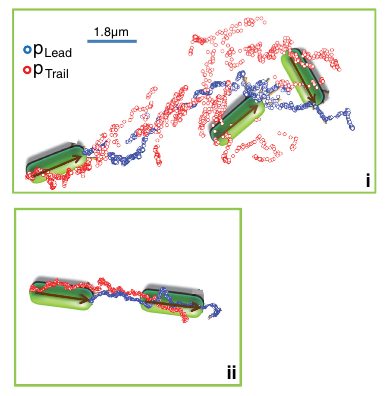 That’s one small step for bacteria, a giant leap for their kind. This figure from the paper illustrates the two kinds of motion, skidding and crawling. The blue and read trails track the ‘head’ and ‘tail’ of the bacteria.

These two motions are quantitatively very different. The scientists found that although the bacteria spend only about 1/20 or 5% of their time in these leaps, they move 20 times faster than their normal crawling pace. Put the two together, and it means that the bacteria cover just as much distance leaping as they do crawling.

This tracking video from the paper shows this sudden move in action:

How do the bacteria manage to propel themselves through these considerable distances? The researchers realized that the bacteria must be using their pili as a slingshot. They use one pilus to tether themselves to the surface, like an anchor. By trying to pull the bacteria forward, the other pili become stretched like taut rubber bands. And as the bacteria severs its anchor, the rubber bands uncoil and it shoots out like a pellet from a slingshot. As it slides away, it can skid to one side like a car that’s taking a turn too quickly. This is the mechanism behind the sudden turns. 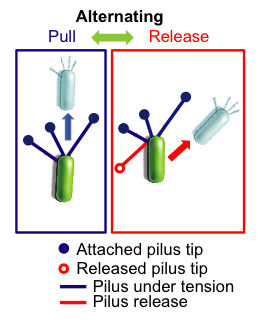 The bacteria alternates between crawling and ‘slingshotting’.

But there’s still a puzzle remaining, and it has to do with the physics of the small. In my previous post I talked about how bacteria move in a world of a low Reynolds number. What this means is that a bacteria feels its environment to be thick and viscous, robbing it of its tendency to maintain its speed (inertia). If you try to fling a bacteria forward, it should immediately come to a dead stop. So how are these slingshotting bacteria managing to coast through the slime? The solution comes from the physics of ketchup.

Let’s start with pouring honey out of a bottle. It doesn’t matter much if you squeeze the bottle or not. That’s because honey is a Newtonian fluid, meaning that its viscosity (or syrupy-ness) is independent of how much force you apply. You can’t rush such fluids, they’ll just stubbornly keep doing what they’re going to do.

On the other hand, there are some strange fluids like quicksand. These thicken up if you squeeze them, a fact used as a gag in countless hollywood films (quicksand had its heyday in the 1960s, when 3% of all films showed someone sinking in mud, sand or clay!)

Such fluids in which the viscosity increases with the applied force are known as shear thickening fluids. Silly putty has this property, as does cornstarch mixed with water, much to the amusement of kids everywhere. 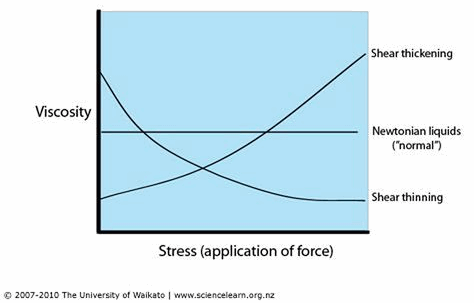 And then there are fluids whose viscosity decreases as you squeeze them. These are the shear thinning fluids. This is like ketchup, that flows when you squeeze or shake the bottle, but won’t flow off your burger. Paints work on the same principle. They will flow across the canvas when applied with the force of a brush, but won’t drip when left alone.

And biofilms fall into this latter class of fluids. In the case of our bacteria, the researchers estimate that force of the slingshot is enough to lower the viscosity of the surrounding goo by three-fold.

By launching themselves forward, the bacteria are taking advantage of this quirk of physics to effectively slice through the slime. This is in contrast to the strategy adopted by the stomach bacteria Helicobacter pylori, that solves the problem using chemical engineering. H. pylori lives in the mucus lining of our stomachs, an alarmingly inhospitable environment for a life form. To help it move, it releases a chemical that thins out the surrounding mucus.

These bacterial communities are the results of countless failed experiments in the annals of evolution. In the game of life, success follows a seemingly endless line of heavy losses and incremental gains. And yet, from our shower curtains to the linings of our stomach, these microbes have arrived at strikingly clever solutions to the problem of getting around in a sticky situation.

Jin F, Conrad JC, Gibiansky ML, & Wong GC (2011). Bacteria use type-IV pili to slingshot on surfaces. Proceedings of the National Academy of Sciences of the United States of America PMID: 21768344

Image References All images link to the source, except those taken from the paper.