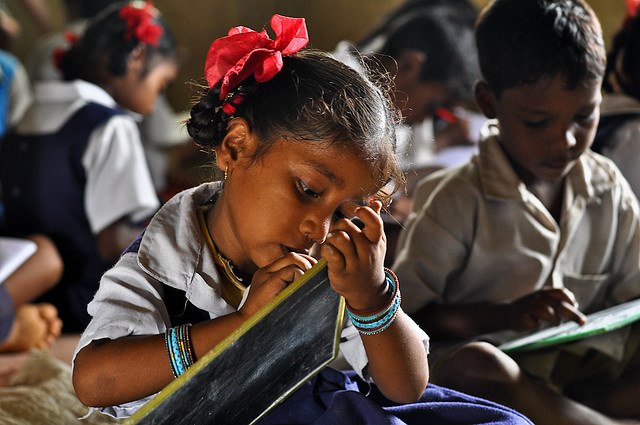 A friend of mine recently pointed me towards an incredible resource. It’s called the Annual Status of Education Report (or ASER, which means impact in Hindi). ASER is an ambitious survey of the state of Indian rural education, conducted yearly since 2005, and their 2011 report came out a few days ago.

The level of organization here is truly impressive. It’s the largest survey conducted outside the government, combining the efforts of over 25,000 young volunteers from local organizations. Together, they survey nearly 300,000 households in over 16,000 villages in all states of India, and conduct basic level reading and numeracy tests on over 700,000 children.

Behind this coordinated effort is a simple and powerful idea, that effective policy needs to be based on evidence. The report takes a refreshingly no-nonsense approach. Rather than starting off with a long list of dignitaries to thank and lofty goals to implement, ASER gets right down to the point, with figures and tables. They focus on two basic goals. How many children are enrolled in schools (and what kind of school)? And are these children learning the very basics of reading and numeracy? By comparing trends of schooling and learning in different states, they have put together the most detailed picture so far of what’s working and what isn’t in rural education. The general picture that is emerging is one of rising enrollment but declining learning outcomes, from levels that were already low.

So let’s get down to the data. While reading through the report, some surprising facts and numbers jumped out at me.

More kids are going to school than ever before. Among 6 to 14 year olds in rural India, 97% are attending school. The toughest demographic to keep in school is 11 to 14 year-old girls, and even here the numbers are improving. Attendance in this age range has gone up from 90% to 95%. This is a remarkable achievement, and a necessary first step towards a right to education. 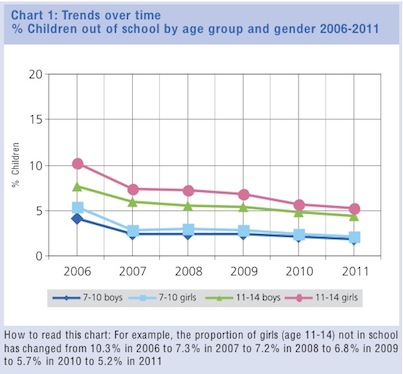 The graph shows the percentage of children who are NOT in school. Attendance is on the rise, so these numbers are falling.

Teachers are attending school regularly. Their attendance is at 87% (on the day of the survey). Gujarat is doing particularly well with 96% of teachers attending, and ten states have greater than 90% teacher attendance. However, as these results are based on a single day of measurement, you should take them with a grain of salt.

But the students aren’t. Student attendance is at 71%, a number that has dropped in the last four years. Some states have dropped over 10 percent here. Bihar is at the bottom of the list here, with 50% student attendance.

A quarter of all students are attending school in a language they don’t speak at home.

More than half of students in the fifth grade can’t read at second grade level. Similar statistics arise for basic math levels. The ability to read complete sentences or add and subtract numbers is not a very ambitious standard for learning, and Indian schools are failing to achieve even this. 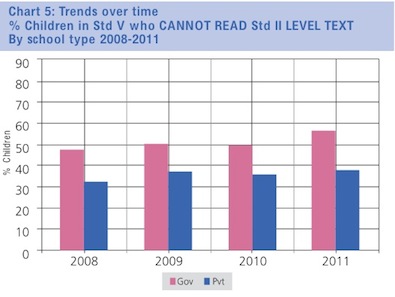 The percentage of fifth graders who can’t perform at second grade level is on the rise.

What’s more, the math and reading levels are falling further. Learning outcomes have fallen over the last six years. Some states have dropped by over 10 percent in the last year alone.

What could be causing this drastic decline? The study points to certain problem areas. For one thing, the number of classrooms that cater to more than one grade level is on the rise. In some of the problem states, teacher and student attendance is also falling. Also, 2011 was the year the Indian census was conducted, which meant that teachers were pulled out of school to conduct surveys. Neither of these factors can individually be held responsible for the trend, but taken together they build a story of educational decline.

A tale of two states - one growing and the other wilting. What is shown here is the percentage of  children who can read at first grade level, grouped by their grade level. Learning outcomes in Punjab are on the rise, but they are falling in Haryana.

Take the case of Punjab and Haryana. These neighboring states share a capital, are matched in student and teacher attendance, in private school enrollment, and in numbers of classrooms that host students of multiple grades. Yet they are moving in opposite directions. Every year, the Punjab schooling system is becoming more effective in converting non-readers into readers, whereas the opposite is true in Haryana. The report argues that part of this difference may be explained by a three-year program taken on by Punjab to improve levels of reading and numeracy.

In Madhya Pradesh, reading levels were on the rise while focused literacy levels were in place, but have since plummeted.

Similarly, consider the situation in Madhya Pradesh. It was improving in teaching effectiveness until 2008, after which learning levels took a precipitous fall. Some of this must have to do with the lower levels of student and teacher attendance, and a higher number of classrooms that cater to multiple grades. But what explains the initial rise? In 2005-2006, and again in 2007-2008, the state launched focused campaigns to improve reading and basic literacy, which could have had a positive impact.

The ASER findings highlight the failings of the current system, and they point towards areas where the central and state governments need to take action.

Perhaps the saddest picture emerges in a short article that summarizes the state of affairs, written by Lant Pritchett, a professor of International Development at Harvard Kennedy school. He imagines the trajectory of a young boy or girl who has just enrolled into school. What can the numbers tell us about the likely fate of this child? The numbers he presents are from the 2010 data, so I repeated the same calculation for the latest data. The following table summarizes the fate of this young child, in a nutshell (explained below).

In any year of schooling, 3 out of 4 children who can not read will not learn to do so.

This table tells a heart-breaking story. Here is how it works. The second column tells you the percentage of students who can read at second grade level. The next column shows the improvement in this number, for every year of schooling. This is the fraction of students who are learning to read in every grade (the gain from grade to grade). For example, by the end of the third grade, 10.1% more of the students can now read a basic text.

Using this data, you can then ask the following question. If you come into a grade not knowing how to read, what are the odds that you still won’t be able to read at the end of the year? **This is the number presented in the last column [1]. It measures the failure of the schools to bring a child to literacy. The larger this number, the more likely it is that a child who is left behind will stay behind.** For example, of the children who enter the fourth grade not knowing how to read, 81% will not gain literacy that year.

Now imagine the plight of our hopeful student, who has just joined the second grade, without knowing how to read. It is pretty much a given that they will not learn how to read in the second grade (94% odds). In the third grade, 9 out of 10 students will not learn how to read. In the fourth grade, 8 out of 10. The Right to Education Act mandates that students should not repeat a year. So every year, this child is promoted onwards, with the hope that somebody else will notice and help. But year after year, the odds are stacked firmly against them. Lant Pritchett describes the outcome:

"The result is that you could easily be one of the one in three children who complete lower primary schooling, passed through five entire years of schooling, having spent roughly 5,000 hours in school, still lacking the most fundamental of skills. And so, year after year, a dream deferred becomes a dream denied."

You can query the ASER data from all years, and download the annual reports.