Archerfish are incredible creatures. They lurk under the surface of the water in rivers and seas, waiting for an insect to land on the plants above. Then, suddenly, and with unbelievable accuracy, they squirt out a stream of water that strikes down the insect. The insect falls, and by the time it hits the water, the archerfish is already waiting in place ready to swallow it up. You have to marvel at a creature that excels at what seems like such an improbable hunting strategy - death by water pistol squirt.

Here’s a video by BBC Wildlife that shows the archerfish in action (the first half of the video is about archerfish).

Technically, the term archerfish doesn’t refer to a single species of fish but to a family of 7 different freshwater fish, that fall under the genus Toxotes. They strike with remarkable accuracy, and just a tenth of second after the prey is hit, they quickly move to the spot where it will hit the water. Unlike most baseball players who have to keep their eyes on a fly ball to track it, in less than the blink of an eye, the archerfish is in place, waiting for the insect to arrive.

If that isn’t impressive enough, consider this. When these archerfish squirt water, their eyes are underwater. If you’ve spent any time in a swimming pool, you’ll know that light bends when it enters water. A less astute fish might not correct for this bending of light, and would be tricked into thinking that the insect is somewhere it isn’t. But not the archerfish. This little aquatic physicist is able to seamlessly correct for the bending of light. And it isn’t a minor correction - when the perceived angle of the target is 45 degrees, its true angle is off by as much as 25 degrees.

When aiming their shot, archerfish have to correct for the bending of light

And it gets better. Spit doesn’t fly in a straight line, because the Earth pulls it down. The archerfish understands this. It’s able to correct for how gravity bends the spit’s path. 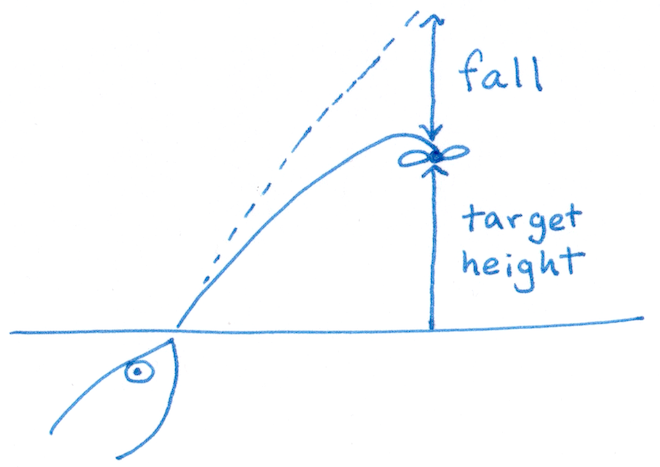 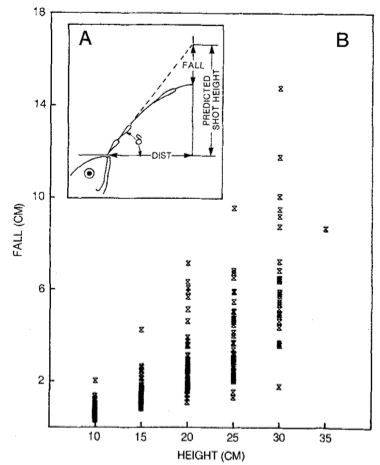 And the story doesn’t end here. There’s something else that’s really strange about the archerfish’s hunting strategy. It has to do with how the water travels from the fish to its target. I learned about this counter-intuitive phenomenon from Alberto Vailati, a professor of fluid dynamics in the University of Milan.

Let’s start with a high-speed video of the archerfish spitting strategy, that Alberto was kind enough to share with me. Here it is in gif form (slowed down about 14X):

Now I’m going to take this video and analyze it using Tracker, an easy to use open-source physics video analysis toolkit. The question I’m curious about is, how fast does the water stream travel from the fish’s mouth to the target?

Alberto provided me with the frame rate of the high-speed camera and the size of the fish - this let me set the distance scale and time scale in the video. Then, I tracked the blob at the tip of the squirted water.

If you track the blob versus time (top right in the above video), the graph looks like a straight line. The entire strike happens in just 4 hundredths of a second, or 10 times faster than the blink of an eye. It’s so blazingly fast that the water blob hasn’t had much time to fall as yet (that’s why the graph resembles a line and not a parabola). 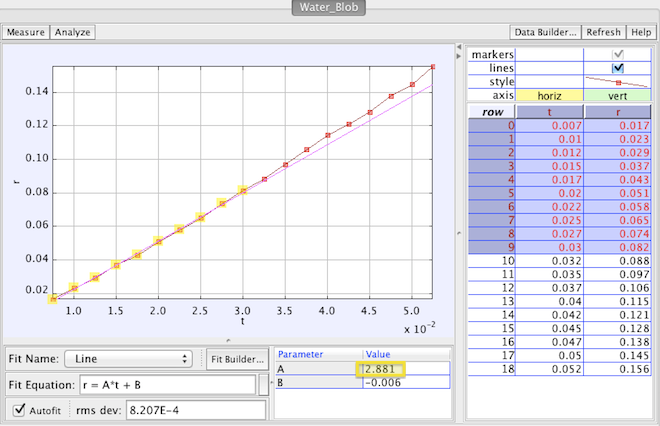 Now let’s look at the second half of the trajectory. 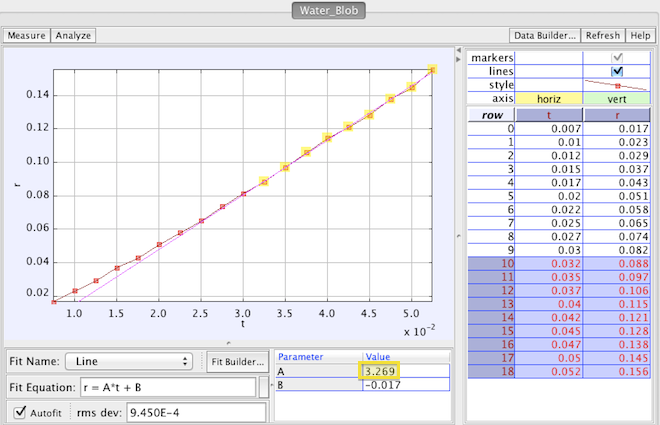 The slope of the line tells us that the speed of the blob is now 3.27 meters/second.

Do you see what’s odd here? The water blob is speeding up – it’s accelerating. As it climbs higher, it moves faster. This is in stark contrast to, say, a basketball or a bullet, which, when shot upwards, will slow down because of gravity and air resistance – they decelerate.

Maybe we messed up, somehow? Let’s try another video. This one is recorded at 1000 frames per second, so there’s more data.

Again, I used Tracker to track the water blob. Each of those red circles that you see are just a thousandth of a second apart.

Like before, let’s first find the speed of the blob as it leaves the archerfish. 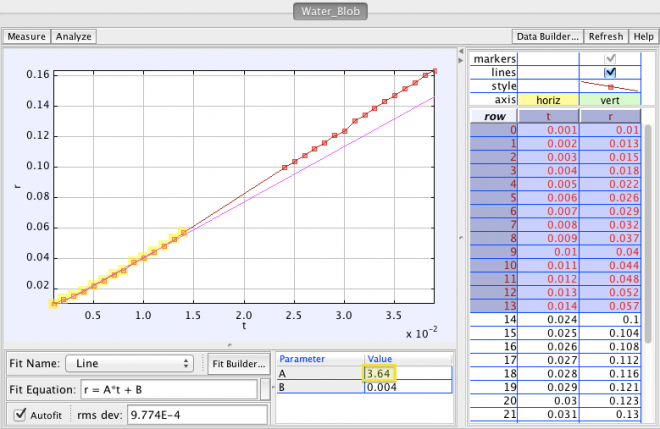 Next, let’s find its speed near the top of the trajectory. 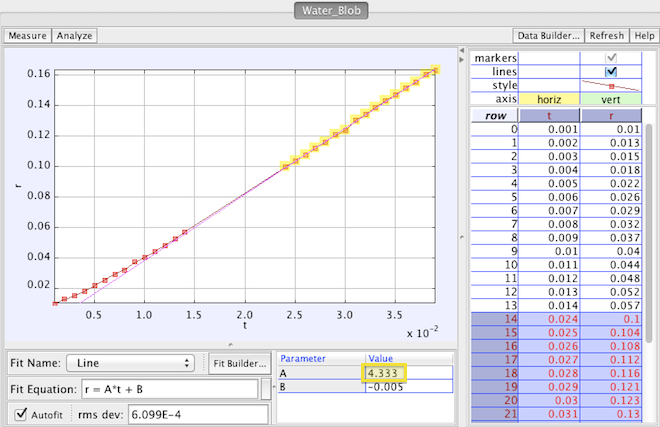 It’s 4.33 meters/second. Boom! Once again we find that the water blob is speeding up. How can that be?

This is exactly the phenomenon described by Alberto Vailati, Luca Zinnato, and Roberto Cerbino in their recent paper on the fluid dynamics of the archerfish water jet. They analyzed many different trajectories of water squirted out by archerfish, and concluded that it consistently hits the target at a greater speed than it left the fish. And they showed that the archerfish is using a few tricks from fluid dynamics to maximize the force with which the water hit its prey.

Here’s how it works.

The first trick has to do with bunching up. When the archerfish squirts a jet of water from its mouth, it ensures that the tail end of the jet is moving faster than the leading end. Imagine you’re standing in a queue and the people in the back start rushing forward. This would squeeze everyone into a smaller space. But the people have to go somewhere, and so the queue widens. Similarly, as the water jet is squished by the fast moving water at the tail end, it would widen into a pancake.

This isn’t good for the archerfish, because water that is more spread out will strike the insect with less pressure (force divided by area). Fortunately for the archerfish, there’s another piece of physics that balances this tendency of the water to spread out. You might have noticed this second idea in your bathroom. As water trickles down a faucet, the stream sometimes breaks into small drops of water.

This effect is known as the Plateau–Rayleigh instability. If you look really closely, any stream of water has tiny irregularities – some bumps that are thicker, and slight necks that are thinner. Surface tension, which is the tendency of tiny water molecules to attract each other, causes these irregularities to grow. The necks shrink until they’re pinched off, and the stream breaks into distinct blobs. This Plateau-Rayleigh instability is also behind the phenomenon of ‘splashback’ during urination (now you know what to blame), and has also been exploited by inkjet printers to precisely control how ink falls on paper. 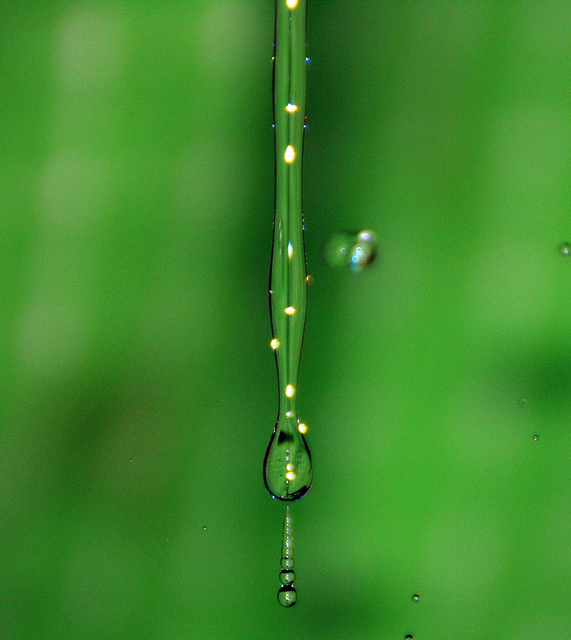 On their own, these two mechanisms – bunching and the tendency to form blobs – aren’t of much use to the archerfish. But when wielded together, they make a powerful impact. The water jet would break up into blobs due to surface tension, but the archerfish has ensured that the blobs in the rear are moving faster than the ones in front. When these fast blobs catch up with the slower ones in front, they merge into a more massive uber-blob that moves faster than before, and strikes its target with a larger force in a shorter amount of time. The energy that was spread out over a stream is now concentrated in a blob.

This isn’t just a neat trick – it’s the key to the archerfish’s hunting strategy. At point-blank range, the water jet doesn’t deliver enough of a force to knock down an insect. But with this power amplification trick, the archerfish can reach a striking power that’s more than five times what any vertebrate muscle can produce.

The archerfish hunts with a working knowledge of motion, gravity, optics, and fluid dynamics, effortlessly solving problems that might keep a physics student up at night. It uses science to give itself superhuman (or rather, superfish) strength – like the Hawkeye of the animal kingdom, it’s always on target and never runs out of arrows.

Refraction and the spitting behavior of the archerfish. Lawrence M. Dill. Behavioral Ecology and Sociobiology.