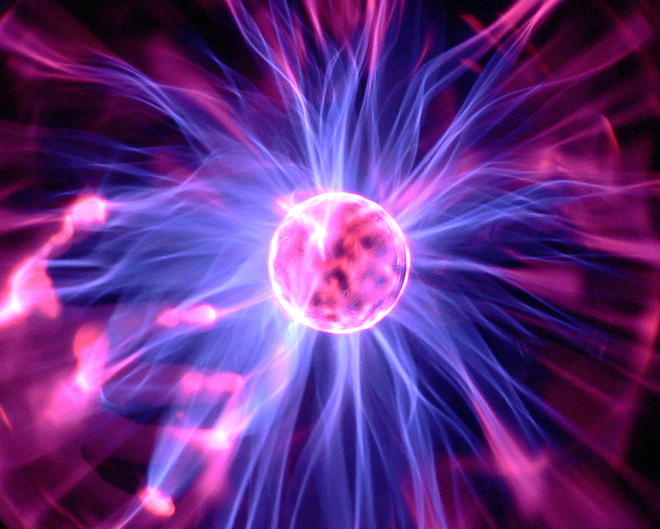 I want to tell you about one of the most beautiful ideas that I know.

This was eleven years ago. I was a college freshman, sitting in a physics lab with all the lights turned out, staring at a blank computer screen, and for reasons that I won’t go into here, listening to a best-of compilation of 80s pop hits. 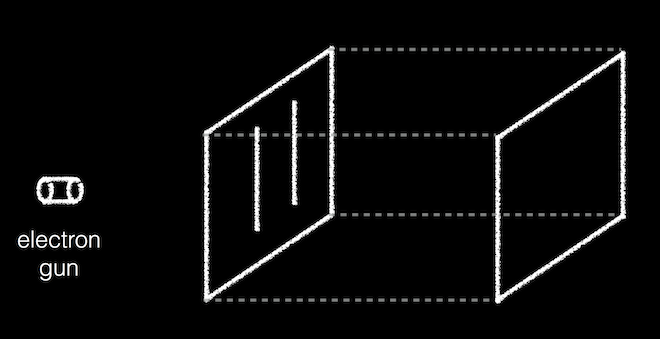 Here’s the setup. On the table in front of me there’s a box with two thin slit-like openings at one end. We’re shooting particles into this box through these slits. I did the experiment with photons, i.e. chunks of light, but others have done it with electrons and, in principle, it could be done with any kind of stuff. It’s even been done with buckyballs, which are soccer ball shaped arrangements of 60 carbon atoms that are positively ginormous compared to electrons. For convenience, I’m going to call the objects in this experiment electrons but think of that word as a stand-in for any kind of stuff that comes in chunks, really.

At the other end of the box is a CCD camera, that takes a snapshot of whatever hits it. Every time a particle makes it to the other side of the box, I see a dot light up at the corresponding point on my computer screen.

Just to be extra careful, we’ve set up the experiment so that there is only one particle inside the box at any given time. Picture, if you like, very tiny baseballs being flung into the box, one at a time. The 80s music plays on, and we sit and wait.

What would you expect to see on the other side of the box? Well, if electrons behaved like waves, you’d expect to see fringes of bright and dark bands, like ripples in a tank of water. That’s because waves can interfere with each other, canceling out when the peak of one wave meets the trough of another, and getting reinforced when the peaks line up. 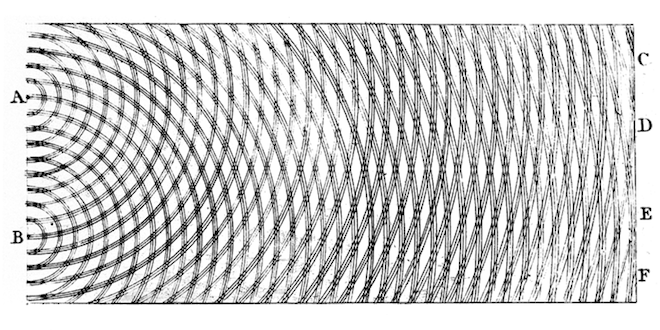 Thomas Young’s 1803 sketch showing how two waves interfere to form a pattern of fringes at the screen. (Public Domain)

An animation showing the same phenomenon.

But electrons aren’t waves - they come in chunks. I know this, because I can see them arriving at the screen one at a time, and they strike at a single place, like raindrops falling on dry pavement. And if electrons are chunk-like, then you’d expect to see them piling up behind the slits and nowhere else. In short, you’d expect them to behave like baseballs.

If electrons behaved like baseballs, you’d expect to see them pile up behind each slit.

And indeed, if you do this experiment with only one slit open, they behave just like baseballs, hitting the wall in a single band behind the open slit. A reasonable prediction, then, is that when we run the experiment with both slits open, we should see two bands - one behind each slit.

So what do the electrons do?

Here, see for yourself. You can watch the electrons coming in one at a time in this video produced by scientists at Hitachi in 1989. The video has been sped up around 30X.

It takes a moment to realize just how odd this is. Somehow, the electrons created this interference pattern of bright and dark stripes. But they were sent in one at a time, so what could they possibly have interfered with? If you’re picturing the electron as a tiny baseball, you’re forced to conclude that an electron going through one slit ‘sniffs out’ that the other slit is open, and adjusts its behavior accordingly. Or that it’s somehow taking both paths and interfering with itself. This doesn’t make any kind of sense.

So let’s take a step back, and try to piece together what happened. Here’s an obvious question that you might ask. Think about an electron that arrives at the screen. Which slit did it go through?

Did the electron go through the left slit?

No! Because when you cover up the right slit, the stripey pattern disappears and you get a boring single band instead.

Did the electron go through the right slit?

No! For the same reason as above. When you cover up the left slit, instead of the stripey pattern you get a single band.

Does the electron go through both slits?

No! Because if that were true, we’d expect to see the electron split into two, and one electron (or maybe half) would go through each slit. But if you place detectors at the slits you find that this never happens. You always see only one electron at a time. It never, ever splits into two.

Did the electron go through neither slit?

No! Of course not, that’s just silly. If you cover both slits, nothing happens.

At this point you’re probably thinking that this is getting a bit ridiculous. Why can’t we just look at the damn electron and see which path it took? The problem with this idea is that looking at something means shining light on it, and shining light on it means bumping it with a photon. If you’re a tiny electron, this bump disturbs your original path.

Well, wait. Maybe you could make the bump really, really gentle, so you don’t disturb the electron much. Indeed, you can do that, but as you make the light more gentle (lower momentum), you also make it more spread out (larger wavelength), and you end up not being able to tell which slit the electron went through.

There’s no way to win here. Any scheme that you can invent to determine which route the electron took will also destroy the interference pattern.

These electrons are doing something we've just never thought of before, something we've never dreamt of before, something for which we don't really have good words in the English language. Apparently, empirically, electrons have a way of moving, [..] a way of being, which is unlike anything that we're used to thinking about. And so do molecules. And so do bacteria. So does chalk. It's just harder to detect in those objects. Physicists have a name for this new mode of being. We call it superposition.

Werner Heisenberg, one of the creators of quantum mechanics, understood this clearly. In 1930, he wrote,

The solution of the difficulty is that the two mental pictures which experiment lead us to form—the one of the particles, the other of the waves—are both incomplete and have only the validity of analogies which are accurate only in limiting cases. [..] the apparent duality arises in the limitations of our language.

As Heisenberg and others taught us, although language fails us, it’s possible to come up with rules that correctly predict how tiny things behave. Those rules are quantum mechanics. You can learn these rules for yourself by reading Richard Feynman’s classic book QED, or watching his lectures on the subject. Using these rules, physicists can throw around fancy sounding sentences like ‘the electron wavefunction is in a superposition of going through the left slit and going through the right slit’. These sentences have well defined mathematical meanings, and they make predictions that match the data. But what’s missing here is a coherent picture that you can hold in your head that will explain which path the electron took, and what’s more, we can be fairly confident that such a picture can never exist.

It’s perhaps not surprising that our ape-brains, which evolved in a middle-sized world throwing rocks and spears, can’t visualize the behavior of very small things. What’s surprising to me is that even though we’re unable to picture this quantum world, we’ve managed to work out the rules of the game.

This post has largely been inspired by watching Allan Adams’s excellent introduction to quantum physics made available by MIT OpenCourseWare. The first lecture is an fascinating and often hilarious look at the principle of superposition explained in a non-technical way. I highly recommend checking it out - he’s a very engaging lecturer.