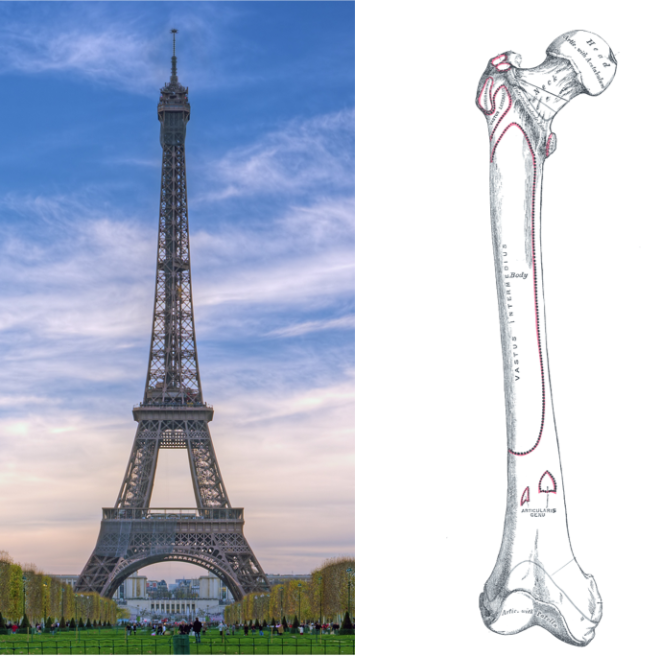 Everyone loves the Eiffel Tower. Its classic, iconic shape is an instantly recognizable symbol of Paris. So you might be surprised to learn that while the tower was being built, art critics were not quite as glowing in their praise. Here are some of the more colorful phrases they used to describe it.

"this truly tragic street lamp" (Léon Bloy) "this belfry skeleton" (Paul Verlaine) "this mast of iron gymnasium apparatus, incomplete, confused and deformed" (François Coppée) "this giant ungainly skeleton upon a base that looks built to carry a colossal monument of Cyclops, but which just peters out into a ridiculous thin shape like a factory chimney" (Maupassant) "a half-built factory pipe, a carcass waiting to be fleshed out with freestone or brick, a funnel-shaped grill, a hole-riddled suppository" (Joris-Karl Huysmans)"

To modern eyes, the tower’s shape is elegant and graceful, perhaps even timeless. But to contemporary critics it was a monstrosity. The tower represented a new kind of aesthetic, and it took people a while to appreciate this. Eiffel was going after a deeper kind of beauty, a kind that wasn’t just skin deep. His notion of beauty had to do with economy and structural efficiency, with achieving the greatest strength with the least possible material. It had to do with seeing pure, efficient, well-engineered structures as works of art.

Here’s Eiffel describing his new aesthetic, in response to his critics.

"Are we to believe that because one is an engineer, one is not preoccupied by beauty in one's constructions, or that one does not seek to create elegance as well as solidity and durability? Is it not true that the very conditions which give strength also conform to the hidden rules of harmony? [..] there is an attraction in the colossal, and a singular delight to which ordinary theories of art are scarcely applicable."

The Eiffel tower is incredibly well optimized to do what it was designed to do, to stand tall and stand strong, while using a minimum of material. Rather than hide its inner workings with a facade, Eiffel exposed the skeleton of his masterpiece. In doing so, he revealed its ”hidden rules of harmony”, many of the same rules that give your skeleton its lightweight strength. 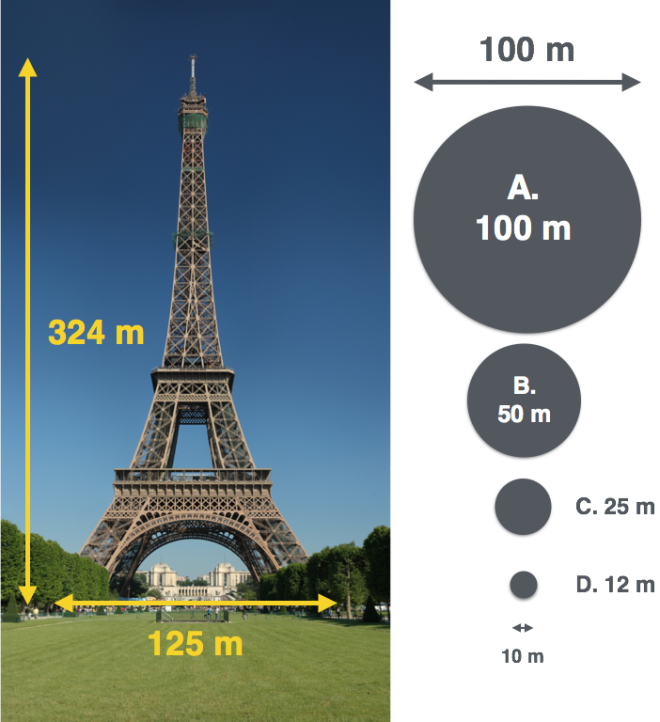 To understand Eiffel’s ingenious design, let’s start with a little puzzle. Imagine that someone melted all of the iron in the tower into a solid ball. How big do you think that ball would be?

Each of the balls shown in the image are drawn to scale, next to their diameters.

Before reading any further, take a moment to guess your answer.

The correct choice is D (here’s the math to prove it). If you melted all the iron in the Eiffel Tower into a ball, it would be just 12 meters (less than 40 feet) in diameter. The tower’s immense height (324 meters, or over a thousand feet) belies the fact that it’s incredibly light for its size. To see it another way, if you were to melt the Eiffel Tower’s iron into a rectangular block as big as its base, then that block of iron would be only 6 centimeters (2.4 inches) tall. It wouldn’t even be visible in the image above. 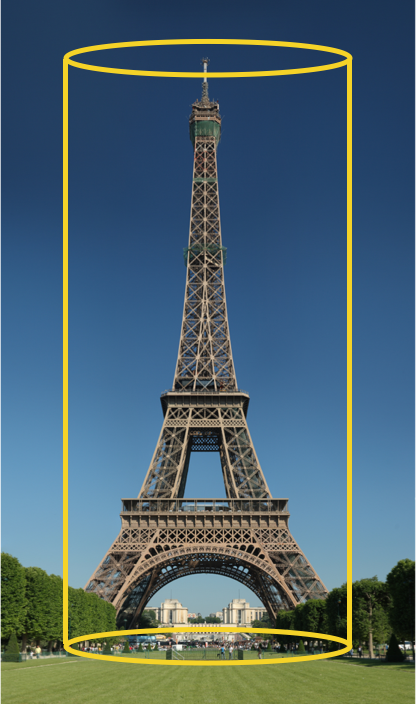 Now think about this.** The air in this tube outweighs all the iron in the tower.** (Don’t take my word for it, here’s the math.)

So how did Eiffel design a structure that’s strong enough to withstand the elements, and yet weighs about as much as the air surrounding it?

The secret lies in understanding the shapes of strength. It’s a lesson we can learn by looking inwards… literally. By studying our bones, we can discover some of the same principles that Eiffel used in designing his tower. 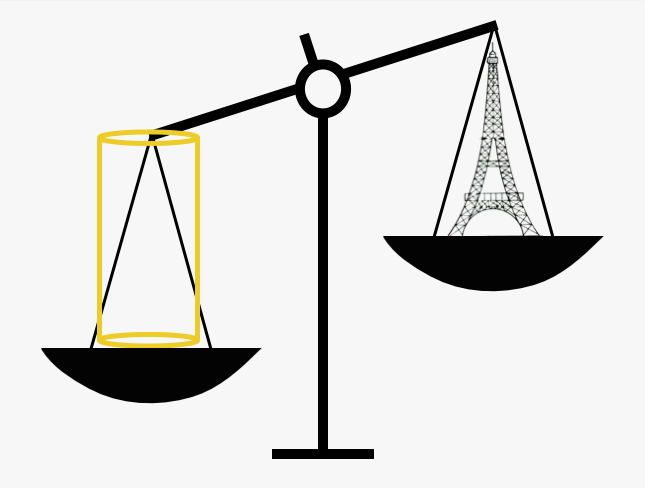 The air in the cylinder surrounding the Eiffel Tower weighs more than all the iron in the Tower.

If you slice a bone open, you’ll find that it’s kind of like a baguette - hard on the outside and spongy on the inside. The outer bone material is hard and compact. This compact bone does most of the heavy lifting for the bone. On the interior is a spongier bone material. This spongy bone also plays an important role in carrying the pushing and pulling forces that our bones constantly endure.

Zooming in to a piece of bone

Now let’s zoom into the crust of that bone baguette - the compact bone. It’s made up of tiny tubes called osteons, each just 2 tenths of a millimeter across, with a blood vessel running down the middle. Zooming further into the walls of these osteons, we find that they’re made out of tinier bundles called fibrils. Zoom further still, into one of these fibrils, and we see that they’re really a bundle of fibers, and each fiber is really three interwoven strands. Pull these strands apart, and we’ve unweaved our bones into its most fundamental unit, a long chain-like molecule called collagen.

Zooming in to a piece of bamboo

Bamboo exploits the same idea. This ultra-fast growing grass needs a way to minimize material and stay very light, so it can grow tall and not collapse under its own weight. Bamboo’s hollow tube shape is a very efficient way to create stiffness. And like bone, bamboo is made out of tinier tubes, which in turn are made out of bundles of fibers, that are each made of out even smaller bundles of fibers, and so on. When you unweave a bamboo down to its tiniest thread, at the scale of a nanometer, you arrive at another long chain-like molecule - cellulose.

Bamboo and bone are both natural nano-engineered materials that use structural hierarchy to achieve their lightness and strength. The Eiffel Tower uses a similar idea. Eiffel borrowed this notion from bamboo and bone (although he probably arrived at it independently), and put it to use on a colossal scale.

Like many modern structures, the Eiffel Tower uses an arrangement of criss-crossing ‘X-shaped’ beams known as a truss. This is a very efficient way to engineer structures by relying on the inherent strength and stability of triangles. If you zoom into one of the Eiffel Tower’s trusses, you’ll find that they aren’t as solid as they seem - each of them are made up out of smaller, similar trusses. The material has more holes than it has iron. This hollow form contributes to the tower’s mind-boggling lightness. The next time you go over a bridge, look carefully, and you’re likely to see the same idea at play. 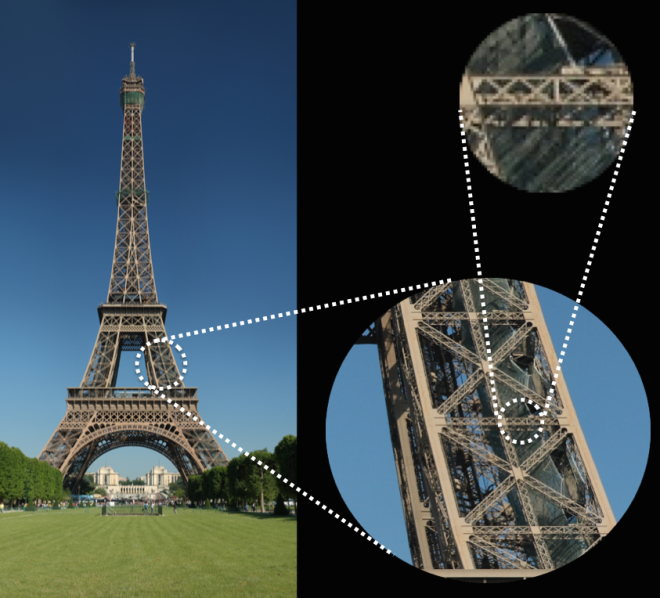 Shaped by the Wind

Once you’ve figured out how to build a lightweight tower, how do you ensure that it stays standing? The Eiffel Tower has to contend not just with gravity but with the considerable toppling force of the wind. To counter this, its sloping curve closely follows the most efficient shape for resisting the wind.

The trick to building a well engineered structure lies in transferring the forces from where you don’t want them to act to where you want them to act. Eiffel understood this. The shape of his tower has the special property that the combined force of the wind and the tower’s own weight will flow down the legs of the tower, all the way down to the strong foundations. (In physics terms, the tower has just the right shape so that the torque, or toppling tendency, generated by the wind is balanced by the torque due to its own weight.)

In the interview where he responds to his art critics, Eiffel describes this idea.

"Now to what phenomenon did I have to give primary concern in designing the Tower? It was wind resistance. Well then! I hold that the curvature of the monument's four outer edges, which is as mathematical calculation dictated it should be [...] will give a great impression of strength and beauty [..]"

By understanding how forces flow, Eiffel’s engineers could design an optimal structure, putting stuff only where it’s needed, and leaving it out where it isn’t. The method that they used to visualize the flow of forces has a curious connection with the science of bones. It’s described in D’Arcy Thompson’s On Growth and Form, a delightful and insight-packed 1000+ page treatise on the mathematical laws that govern biology, published in 1917.

"A great engineer, Professor Culmann of Zürich, to whom by the way we owe the whole modern method of "graphic statics," happened (in the year 1866) to come into his colleague Meyer's dissecting-room, where the anatomist was contemplating the section of a bone. The engineer, who had been busy designing a new and powerful crane, saw in a moment that the arrangement of the bony trabeculae [spongy bone] was nothing more nor less than a diagram of the lines of stress, or directions of tension and compression, in the loaded structure: in short, that Nature was strengthening the bone in precisely the manner and direction in which strength was required; and he is said to have cried out, "That's my crane!""

When an engineer looks at a structure, she looks beyond the material and sees the forces that act on it - it’s a bit like owning a pair of X-ray goggles. These forces come in two types - pushing forces that squeeze an object inwards, and pulling forces that stretch an object outwards. Every physical object that you encounter, from a table or a chair, to a bridge or a skyscraper, is basically a big party of these pulling and pushing forces (or as engineers refer to them, tension and compression forces).

So when Culmann was designing his crane, he was using his newly devised method of ‘graphic statics’ to map out these push and pull forces. And this is what he drew. 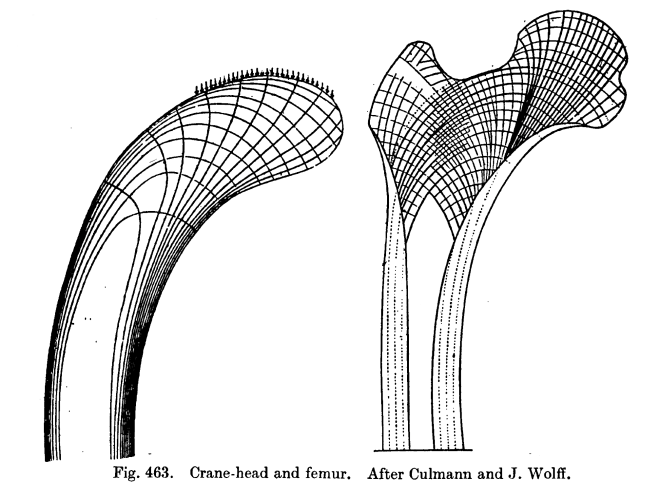 So when Culmann saw the pattern of the spongy bone in the top of the thigh bone, it reminded him of his crane. He was immediately struck by how clearly he could see the criss-crossing lines of forces in the bone. 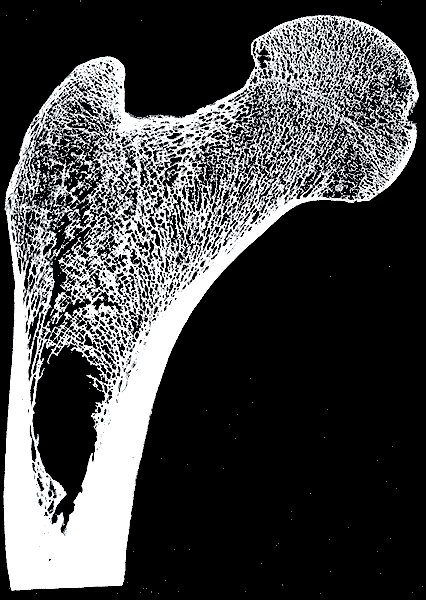 A cross-section of the top of the thigh bone.

The spongy interior of your thigh bone is efficiently arranged so that the material is present where the forces are the greatest, and absent where there aren’t any forces. In bone, this process occurs gradually over its development. The spongy bone hardens and aligns in directions where it experiences the greatest force, and atrophies in places where it isn’t used. There’s an analogy here to how those impressive sandstone arches are carved by the wind. The wind carves away places where the stone is least stressed, leaving in place a three dimensional outline of the lines of force, where the stone is most densely compacted.

In recent years, the mathematical exactness of this relation between bone and force has been called into question. But the general principle, that bone adapts to its functional demands, and that bone structure corresponds to the forces it experiences, is still widely accepted.

What does this have to do with Eiffel? Well, Culmann’s approach of graphically representing the push and pull forces was a powerful new tool, one that’s still used today. One of Culmann’s students, Maurice Koechlin, worked for Eiffel. And it was Koechlin who sketched the original concept of the Eiffel Tower, drawing from his training in visualizing forces. The same tools that Culmann developed and used to understand bone were later used by Eiffel’s engineers to design a tower that minimizes the use of material. 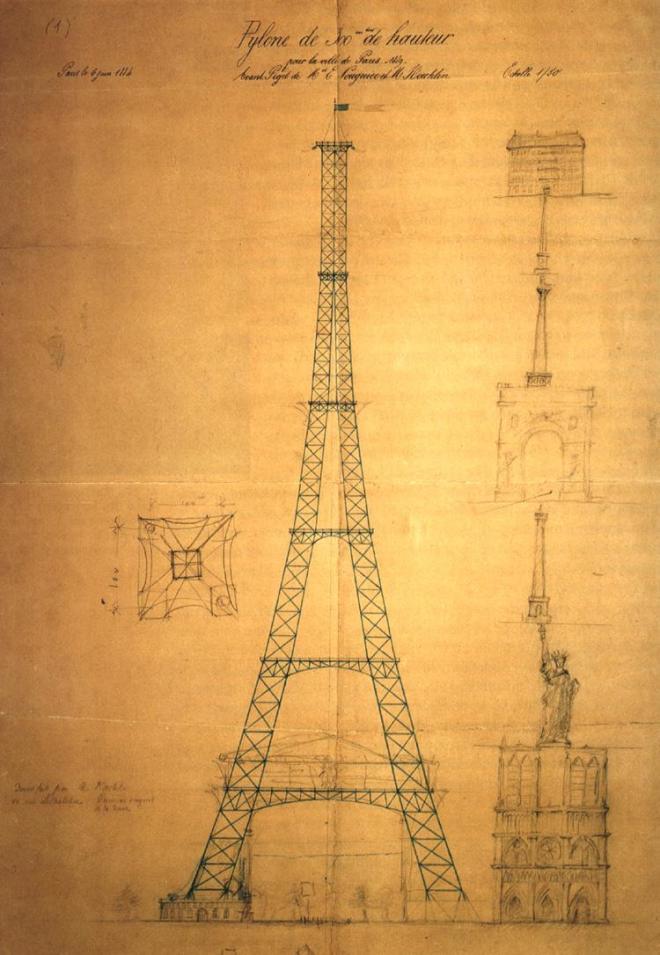 First drawing of the Eiffel Tower by Maurice Koechlin.

So while the critics who called Eiffel’s tower a skeleton meant it as insult, it’s actually quite the compliment. When it comes to engineering, we still have a lot that we can learn from our bones.

On the shape of the Eiffel Tower

On the Forces in the Femur

Gray’s Anatomy on the Femur

On the link between Culmann and the Eiffel Tower