Our sense of smell is really quite incredible. Every time we take in a breath or taste food, countless molecules swarm into our nasal passages. As they move up the nasal tract, these visitors arrive at a patch of cells on which there are over 10,000 different kinds of docking stations. These cells are odor receptors, and each of them can register a different odor. Together they make up a chemical detector that is much more sensitive and versatile that anything we can come close to building.

In a paper published in the journal PNAS in February, the authors demonstrate through a series of ingenious experiments that smell can be sensitive enough to pick up on tiny differences in atomic vibrations.

The conventional theory of smell works somewhat like a lock and a key. The molecules are the key, and they ‘lock in’ to receptors that fit their exact shape and size. This is the shape theory of smell, and the basic idea had been suggested in the 1st century BCE by the Epicurean philosopher Lucretius. The idea has since garnered substantial evidence with the discovery of odor receptors, leading to the 2004 Nobel Prize in Medicine for working out the overall picture of how smell works.

An alternative hypothesis is the vibration theory. This proposes that smell works not by detecting the shape of molecules, but by measuring how the atoms in a molecule are vibrating.

Molecules are groups of atoms that are held together by chemical bonds. These bonds are somewhat elastic, causing the atoms in the molecules to constantly jiggle about. This is analogous to what would happen if you were to connect balls together with springs (something that physicists love to do). But the analogy breaks down at this microscopic scale, and one needs to resort to the laws of quantum mechanics to understand what is happening. It turns out that, similar to the balls and springs, molecules have certain ways in which they prefer to jiggle. They can stretch, rock, wag and twist around.

So, which is it? Does smell work via shape or vibration? The authors set out to address this question with flies.

The best way to distinguish the two theories would be to find two chemicals that are identical in shape, but vibrate in different ways. This is exactly what the experimenters did, by taking a molecule, and replacing some of its hydrogen atoms with deuterium. Deuterium is a sort of heavier sibling of hydrogen that behaves very similarly, but is about twice as heavy. And a heavy atom is harder to wiggle - so the molecule and its counterpart will now vibrate at different rates, but their shape and size will remain the same.

In their experiments, flies were sent down a T shaped corridor. At the junction, they were presented with different odors from their left and right. If they could not distinguish between the odors, you would expect no more flies going left than right - it would just be based on chance.

In the first experiment, the authors presented the flies with acetophenone at one exit. Acetophenone is a colorless sweet smelling liquid with a fairly simple molecular structure. It’s the stuff that’s added to give that cherry or strawberry smell to chewing gum. The other exit just had plain old air. They counted how many flies went through each exit.

They the repeated this experiment with the ‘deuterized’ versions of acetophenone - same shape, different vibrations. If the ability to smell relies only on the shape of the molecule, and not on the vibrations, then one would expect nothing to change.

Instead, here is what they saw. 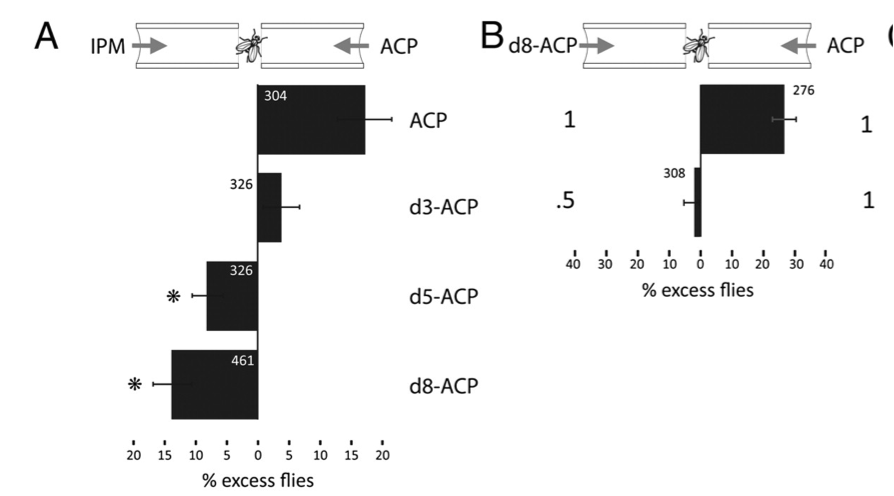 In figure A, the bars show the percentage of flies that chose that chose one exit over the other. The flies were initially attracted to the acetophenone (ACP). However, as the researchers replaced more and more of the hydrogen atoms with deuterium in this molecule (3, 5 or all 8 hydrogen atoms), they found that the instead of being attracted by the scent, the flies were repelled by it.

If the flies were presented with acetophenone at one exit, and its heavier counterpart on the other, they strongly preferred the former scent (first bar in figure B). This implies that they can distinguish between odors whose molecules differ in vibration but are identical in shape! They repeated this experiment with two different chemicals (octanol and benzaldehyde) to ensure the results were robust.

The experimenters then systematically went on to rule out alternate explanations for their results.

First, is this just about scent? Could the deuterium be affecting the flies in some other way altogether, one that has nothing to do with odor? To answer this, they repeated the experiment with genetic mutant flies who lacked a crucial part of their odor receptors. These flies couldn’t smell, and neither did they have a preference between acetophenone or it’s heavier counterpart. So, this is all about the smell.

Now, it could still be possible that perhaps some impurity crept into all the deuterium version. To rule out this explanation, the authors conducted a beautiful set of experiments. The set up is the same as before, acetophenone on one side, and the heavy version on the other. But now, they zapped the flies with an electric shock whenever they made a particular choice - say, for choosing the heavy molecule. In this way, they could condition the flies to reliably prefer either of the two compounds.

What they did next is quite ingenious. They took the flies trained on acetophenone (ACP), and put them back in the T shaped corridor. Only this time, they were distinguishing between versions of a different chemical - the heavy and regular versions of benzaldehyde (BZA). In other words, these flies were trained with the scent of strawberry, and were now faced with the smell of bitter almond - completely unrelated molecules that were synthesized differently. Here is what happened: 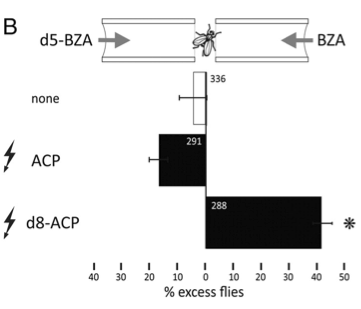 The flies could apply their lessons from one scent to the other. When zapped on regular ACP, they avoided regular BZA, and went zapped on heavy ACP, they avoided heavy BZA. (The experiments were repeated across 3 pairs of molecules to ensure robustness). Since these chemicals are synthesized in entirely different ways, this means that it’s not the impurities, but that the flies can somehow sniff out the ‘deuterium-ness’ of a molecule.

But this raises another question. Are the flies somehow sniffing out the deuterium, or is it the vibrations? In other words, could the deuterium be causing some subtle non-vibrational change in the chemistry that the flies can detect?

In order to answer this, the authors made a clear prediction. Using computer simulations, they showed that when you replace hydrogen by deuterium, the vibrations of ACP change in one essential way - a particular kind of wiggle of the atoms known as a stretch is slowed down. (demonstrated below with hydrogen in blue)

They then identified a pair of chemicals that differed in this precise way. It’s like finding two different sets of musical chords, each set differing in just one note. The pair they found had a citrus lemongrass smell, and had no atoms of deuterium. The flies had no preference for either chemical in the pair.

Based on their theory - that it is the vibrations, not the presence of deuterium, that is being used by the flies to discern smells - the authors made the following prediction. Flies that are trained to differentiate between the deuterium based pair should also distinguish between this new pair of chemicals that have the same difference in vibrations.

And they were right! The preferences the flies had been conditioned with were generalized to this chemically novel setting. So the odor receptors of flies are essentially incorporating a biological version of a spectrograph - an instrument that can tune in to vibrations at different frequencies.

A working model of this ‘tuning in’ might work was first proposed in 1996 by Luca Turin, one of the authors of the current paper. His idea relies on a bizarre but well understood feature of the quantum world, where a subatomic particle like an electron can ‘tunnel’ through a solid barrier. Turin’s theory has remained fairly controversial and is not adopted by the community at large, but his idea has since been checked by physicists and shown to be a consistent, workable model.

I find this work remarkable for a number of reasons. First, it’s science at it’s best - the authors address a fascinating and fundamental question through clear, cleverly designed and simple to understand experiments. Secondly, if Turin’s model is correct, then it is incredible to imagine that natural selection has driven this system to such extreme precision that it is making use of atomic physics. And finally, this work is a great example of what goes by the awful name of interdisciplinary research. This study would not have been possible had the authors not possessed a thorough understanding of biology, chemistry and physics. Such research bridges the arbitrary distinctions between departments, and focuses on what is truly exciting - nature herself.