**This post was selected by Vincent Racaniello as an editor’s selection on ResearchBlogging.org **__The (revised) title of this post was suggested by Lucas Brouwers. Check out his excellent blog on evolution, Thoughtomics. 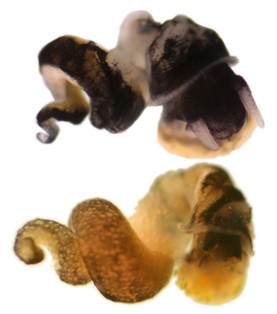 New Zealand mud snails, before and after infection by parasites. These tiny creatures may move slowly, but peering beneath the surface reveals an incredible race for survival.

Why do we have sex? If this question keeps you up at night, you either have really loud neighbors, or you have the makings of an evolutionary biologist. Some of the most brilliant minds in the field - William Hamilton, John Maynard Smith and George Williams - have spent much of their careers wondering about the value of sex. This is not a reflection on the quality of their sex lives. Rather, it has more to do with their creative insight and ability to look at the world with fresh eyes.

A billion years ago, our ancestors inhabited a world without sex. This was the era of the clones. In this strange world, all organisms reproduced by creating identical genetic copies of themselves, somewhat similar to how modern-day bacteria reproduce [1]. But this clonal strategy has a problem. Populations made up of identical twins are more vulnerable to infection. When a disease comes along, it doesn’t just wipe out a few individuals. It can take out the whole lot.

When sex arrived, it introduced a new pace to life. Organisms were mixing and matching genes in combinations never seen before. Imagine a world where you had to dress well to survive. In such a world, the invention of sex is like going from wearing uniforms to having your own wardrobe. You could pick a gene from here, another from there, and put together a novel offspring. And if a particular outfit were deemed ‘unfit’, it’s not a huge tragedy as there are plenty of alternatives.

In this way, sex helps us by innovating new evolutionary solutions and by protecting us from disease. But sex is not without its discontents. For one thing, sexual reproduction implies that you only pass down half your genes to your offspring. The other half come from the other parent, and they combine to make an offspring with a full set of genes. On the other hand, in asexual reproduction, the mother passes on a full set of genes to her offspring. So by adopting sex, your genes are travelling half as far. In evolutionary terms, this is a huge cost, and sex had better have a lot to offer for it.

Do the benefits outweigh the costs? We would certainly like to think so. But when evolutionary biologists did the math, they worked out that the answer is usually no. Your genes typically have more to gain if you reproduced asexually.

So what gives? Why, then, do so many species adopt a sexual lifestyle? Well, here’s a brilliant solution offered by Hamilton and others: if you are under constant attack by rapidly evolving parasites, then sex is a better strategy than cloning yourself. This idea came to be known as the Red Queen hypothesis and can be summarized in one line: it’s harder to hit a moving target. 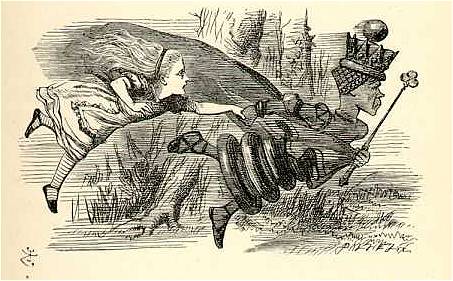 “Now, here, you see, it takes all the running you can do, to keep in the same place.

According to this theory, the main purpose that sex serves is to rapidly change our genetic makeup in order to keep pace with the threat from parasites. The parasites themselves are also evolving in order to keep attacking us. It’s a race where everyone is running but no-one really gets ahead, quite like the race between the Red Queen and Alice in Through the Looking Glass. While this does have a nice literary ring to it, I prefer a more space-age analogy. I picture the eternal chase between the evil robots and the human race in Battlestar Galactica. Technology keeps evolving on both sides, and so the humans have to work just as hard as ever to stay one step ahead. 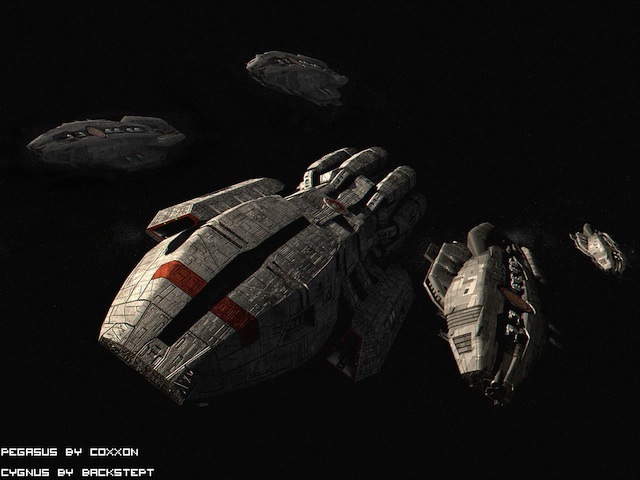 Sex and the cylon. The Red Queen hypothesis suggests that sex evolved as a strategy to evade repeated attacks from parasites.

The Red Queen idea was a theoretical offshoot of evolutionary theory. And like any good theory, it made a clear, testable prediction.** Species that are exposed to a greater load of parasites should be more likely to reproduce sexually.** In the last few years this idea has found support in a beautiful series of experiments involving snails, led by Kayla King, a graduate student in the lab of Curtis Lively at Indiana University.

Snails have interesting sex lives. In many species, the snail has a choice - it can either mate with another snail, or it can directly clone itself. Hedging bets by ‘going both ways’ is a remarkably common strategy in the tree of life [2].

In a study published in 2009, the researchers focused on a type of snail called the New Zealand mud snail, that inhabited two different lakes in New Zealand. Crucially, both lakes also had a parasite that infected the snails. The parasite is called microphallus, a bit harsh for a worm that’s only a fifth of a millimeter long as an adult, in my opinion. And these parasites have a strange and alarming life cycle.

Picture this: the eggs of microphallus are eaten by the snails. They hatch into a larva, which begins to grow in the snail’s gut. The larva drills through the intestine, making its way to the reproductive organs. Here the parasite begins to multiply, and consumes much of the snail’s reproductive and digestive tissue, rendering it completely sterile. Eventually the body of the snail contains hundreds of tiny cysts. When a duck comes along and eats the snail, the next stage of the parasite’s life begins. These cysts hatch to form tiny worms, which spend their entire adult lives in the duck’s intestine. Here they meet other worms, mate and produce eggs - which completes the life cycle. If this picture sends a shiver down your spine, you’re not alone.

Now, ducks only live near the lake’s surface. And the parasite can’t survive without ducks, which means that it is basically confined to shallow water. If the Red Queen idea is correct, **then a heavy parasitic load should lead to intense evolution of the host, through sexual reproduction. **To test this idea, the researchers went to two different lakes and compared the snails that lived in shallow waters to those found in greater depths. 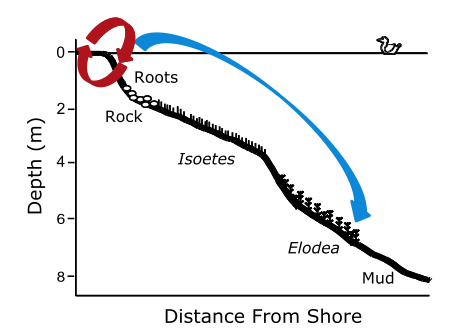 The ecosystem of the snails. In red is the shallow region where the parasites live, and evolution is in full gear here. The blue region is deeper, more parasite free and consequently evolutionary less exciting.

None of the 17 populations had done away with sex entirely. They found that as the prevalence of infection increased in a population, so did the percentage of sexually reproducing snails. As in the previous experiment, this suggests that parasitic load is driving populations to adopt sex for reproduction. They also found that among the snails that were asexual, **as the prevalence of infection increased, so did the diversity between clones. **What this suggests is that parasitic load is doing more than just driving sexual reproduction. It is also alleviating one of the main problems of the clonal strategy - lack of genetic diversity.

The Red Queen hypothesis is an out-of-the-box solution to a scientific conundrum. It is creative, theoretically consistent, and makes clear cut predictions - the hallmark of good science. And personally, I find it cool because it teaches us that the little guys matter. The idea that tiny microscopic life forms are driving the evolution of macroscopic beings completely topples our notions of who’s in charge here.

[1] Many caveats here. For one, bacteria can engage in a kind of primitive sex.

[2] All species that have switched to a completely asexual lifestyle did so fairly recently, in evolutionary terms. This must mean that many who have tried to adopt such a strategy went extinct in the long term. There is one remarkable exception, and that is the Bdelloid rotifers, who have gone without sex for 80 million years!

The Red Queen: Sex and the Evolution of Human Nature

And this Nova documentary called Why Sex?

Alice and the Red Queen from Through the Looking Glass (Public Domain).