I spent last Sunday hiking with friends in the Shawangunk Ridge, in New York state. The Gunks, as it is locally known, is a ridge of bedrock that extends from the northernmost tip of New Jersey to the Catskill Mountains in New York. It was an incredibly foggy day, so we didn’t get to see any of the scenic vistas. But we did get to enjoy the weirdly diverse vegetation, all of which was covered in dew. The highlights were hiking through a beautiful ice cave, and having lunch on a ledge overlooking a 180 feet (54.6 m) tall waterfall. That’s a few feet higher than the vertical drop of Niagara falls. Check out some of my pictures below (fullscreen for full effect).

In the last image, you can use the people as a scale to get a sense of the size of this waterfall. The vertical cliff face that you see was once the site of a geological fault, where a crack formed in the bedrock and broke the symmetry. Rock on one side of the fault then slipped under, as rock on the other side got pushed above. Erosion has since gotten rid of the topsoil at this fault line, exposing the layers of bedrock beneath. It’s a striking testament to the power of geological forces.

The layers of rock that you see have been dated to about 430 million years ago. This was an interesting time in our history. It is when our ocean-dwelling fish ancestors started incorporating a new invention into their bodies - bone. It was also the time when these ancestors (who would later give rise to amphibians, reptiles, birds and mammals) parted ways with the ancestors of some rather interesting characters. These were the Coelacanth and the Lungfish, the so-called ‘living fossils’ of the ocean.

Meet the Coelacanth. One of our more interesting relatives

Of course, there’s really no such thing as a living fossil, as Darwin was well aware when he coined this phrase. Every species alive today has been evolving for just as long as we have (and usually much longer, because evolution is measured in generations and not years). But the Coelacanth, and to a lesser extent the Lungfish, are the few cases where this phrase is appropriate. Fossil records and genetic comparisons bear out that Coelacanths have indeed not changed a whole lot for hundreds of millions of years. Our ancestors from this time may, at least superficially, have looked something like this.

In physics there is a concept known as spontaneous symmetry breaking, where a system that was initially symmetrical suddenly ends up in a non-symmetric state. Picture a ball precariously balanced at the top of a hill. There’s no way to know which valley it will roll down into, this is decided by tiny random fluctuations. But once the ball rolls down the hill, the symmetry is broken. You have to climb up the hill and look down at other valleys to figure out that symmetry was once there. Particle physicists are always on the lookout for these hidden symmetries. Unlike the case of balls on hills, the symmetries that physicists look for are not something that we can see. They are looking for symmetries in equations - in the language that nature uses to express herself.

In 1865, James Maxwell taught us that electricity and magnetism can be combined in a unified picture of light. We live in a world where the symmetry between electricity and magnetism is unbroken. In the twentieth century, the discovery of radioactivity suggested that there must be a new kind of interaction inside the atom, that was responsible for turning neutrons into protons. This was called the weak force, and it was thought to be fundamentally different from electromagnetism. By 1968, three physicists - Steven Weinberg, Abdus Salam and Sheldon Glashow - had worked out what was really going on.

It turns out that we live in a world with a broken symmetry between the electromagnetic and the weak force. They appear to us to be entirely different entities, but this is not really the case. There is a hidden symmetry manifest in the equations, and if you go back in time to the hot conditions of the early universe, this symmetry between light and radioactivity is restored. This kind of unification between seemingly disparate forces is what many particle physicists devote their lives to. By building advanced machines that can collide particles at immense energies, they are recreating the more symmetric conditions of our early universe. The journey of particle physics is, in many ways, a quest further back in time to seek out more symmetry in nature.

I think an analogous process takes place at smaller time scales. Three and a half billions years ago, we shared a common ancestor with all life on this planet. As we travel back in time from the present day to that point, the ancestors of more and more species start to meet up. It’s like travelling up a river from mouth to source - along the way you merge with different rivulets, streams, and distributaries. At every step of the way, we are discovering a more symmetrical state of life, of which we are all broken-symmetry manifestations. 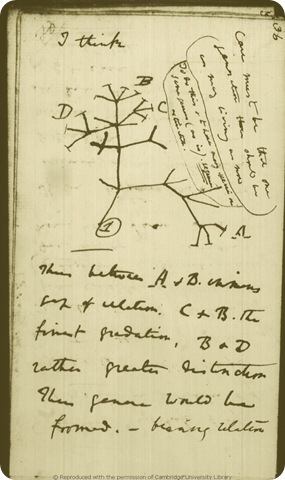 A page from Darwin’s notebook depicting the first Tree of Life. Above it, he pens the immortal words,

And there are plenty of other changes along the way. The geology of the Earth is changing. As we travel back the hundreds of millions of years, the Earth goes through cycles of continents coming together and separating. Further back still, and the Earth is basically a molten hot ball of lava. Then our solar system begins to disassemble into a disc of dust, and the Sun diffuses into a nebulous cloud of hydrogen gas. Billions of years pass, as the galaxies too begin to crumble into gas. And then things start to get weird. 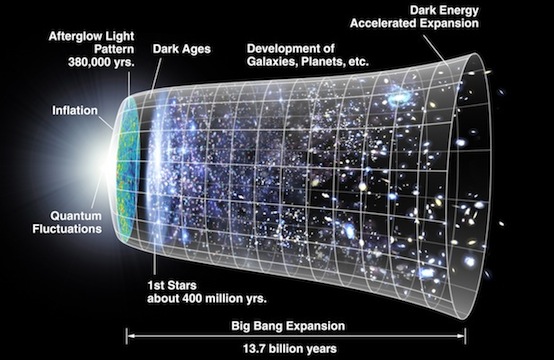 All roads lead to a Bang

The universe goes through its dark ages, a time when it is too crowded with charges for light to be able to travel. Push further back still, are we are now very close to the source of this proverbial river. Just a fraction of a second away from the Big Bang, the universe is now going through a crunch of a scale that is impossible for our human minds to grasp. And after travelling back in time for 13.7 billion years, we arrive at a universe that’s unbelievably compact, hot, and unimaginably smooth - a state of ultimate symmetry. And before that, well.. the physicists are still working on it. We reach the limits of the current laws of physics.

What this timeless quest for symmetry teaches me is this - the world is fascinating at every scale. By learning more about nature, we are slowly climbing back up the hill. As we reach higher, we turn around to look back at the valley from where our quest began. What we see is home, but in a much richer and more informed context.

Have a great week, and happy exploring!

My previous musing: Plastic flowerpots and the mighty alphabet of the universe

Also, Wired Science has a nice interview today with Hans Fricke, a man who has spent more time with Coelacanths than anyone else.