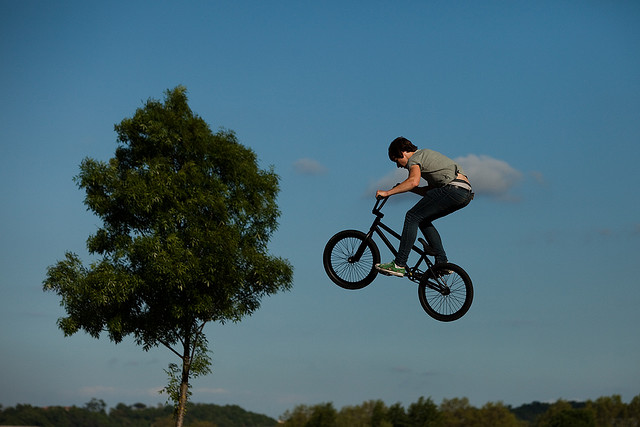 It feels good to be an animal. Unlike trees that are tethered to the ground, we animals have the incredible ability to travel. And we do so in a variety of ways. Some like to walk, others run. Others get around by swimming or flying. There are climbers, leapers, and hoppers, and others that prefer to roll and tumble.

Locomotion certainly affords us a great deal of freedom, but it comes at a considerable energy cost. Through countless generations of incremental evolution, our bodies have arrived at many solutions to balancing our energy budget. Fish have streamlined profiles, birds have hollow bones to stay light, and kangaroos have spring loaded hind legs that seamlessly capture and release the energy needed for flight. In the African savannah, predators chase down their prey using long, muscular legs that give them an efficient stride.

In addition to changes in form, animals can also use strategies to travel more efficiently. Birds that need to fly a long distance often make use of a curious technique. They flap their wings to gain height, and once they builds up enough height, the wings stop moving and they glide back downwards. Many birds repeat this wave-like motion in flight, instead of flying at a fixed altitude.

It’s like the difference between cycling on flat terrain or on an undulating, hilly road. In one case you pedal at a steady pace, in the other you alternately pedal hard and don’t pedal at all. The reason that birds adopt this undulating flight strategy is that it saves them energy.

But what’s special about air? What about animals that live in water? In the ocean, swimming is the equivalent of flying. So do marine animals adopt similar swimming strategies to conserve energy? To answer this question, an international group of researchers led by Adrian Gleiss attached sensors onto sharks and seals. They monitored the swimming motion of the whale shark, the white shark, the northern fur seal, and the southern elephant seal.

Here is an animation that they made directly from their recordings, that shows a whale shark swimming.

It’s as if they’re climbing an imagined hill - they work on the way up, and glide back down. In fact, all four species adopted this undulating swimming strategy. This figure, from their paper, summarizes the authors’ point. 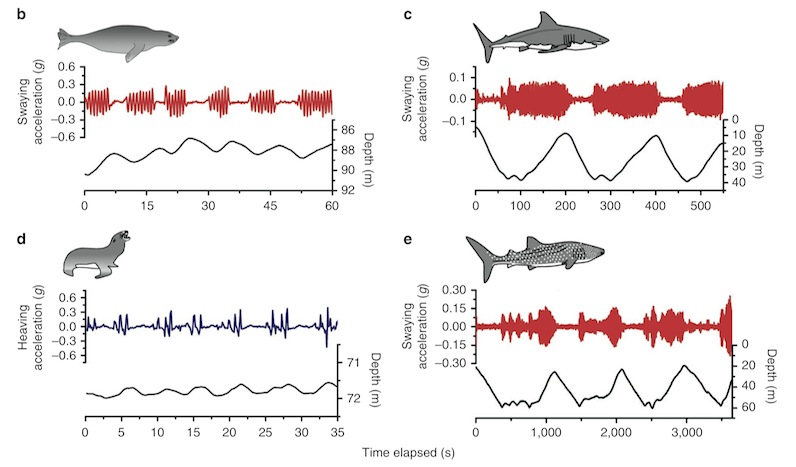 For each animal, you see two plots. The first is a plot of its acceleration, and the second is a plot of its depth. By comparing the two, you can see that all the animals are swimming on the upslope to gain height, and then gliding back down effortlessly, just like a bird, or a cyclist on a hilly road.

The authors emphasize that this is especially remarkable, as these species have distinct evolutionary histories, and very different modes of propulsion. Elephant seals swim using hind limbs modified into flippers, fur seals use their pectoral muscles, and sharks use their tail fin. And yet, we find that in the ocean and the sky, species that are separated by millions of years of evolution are united in their solutions to one of life’s basic problems - how to get around effectively.

But there’s still a puzzle: if wavy swimming is more energy efficient, why don’t all fish do it? Why do some fish swim in this fashion but others chose to swim continuously? The authors claim that it’s all got to do with whether you naturally float or sink. They support this idea with an interesting observation: seals that swim in shallow water do so continuously, but those swimming at greater depths undulate and swim intermittently. The difference is stark - once they exceed a certain depth (15 meters, in the case of the elephant seal), they suddenly become wavy swimmers.

Here’s why the scientists think this happens. If you take a person and (very temporarily) submerge them in water, odds are that they will neither sink nor rise. That’s because humans are what is known as neutrally buoyant, meaning the density of our body exactly matches that of the surrounding water. (This is not quite true. I have a few friends who swear that they sink in water, and they’re probably right. As with any average quantity, there are some that exceed the mean, and others that don’t.) 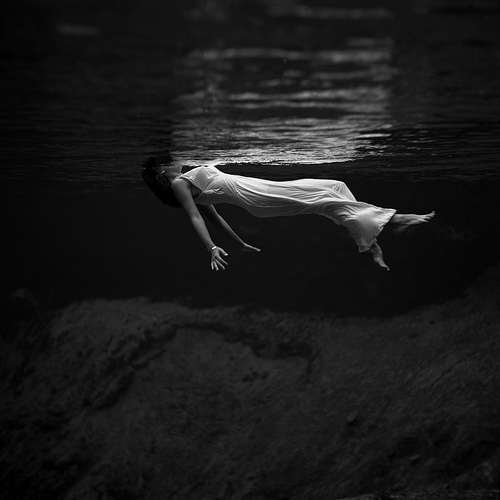 Seals are in the same boat as us, they don’t need to work to stay afloat. They are naturally buoyant, and so swimming in the wavy way is unnecessary. However, as they dive deeper, things begin to change. As the pressure of the water increases, it squeezes their bodies into a smaller space. The same mass is now packed into a smaller volume, so the seal has become denser than water. Instead of floating, it now sinks. The authors argue that in such a situation, it makes more sense to swim wavy.

And the sharks support this idea. Unlike the seals, they don’t have lungs, or gas bladders like many other fish have. There’s nothing particularly squishy in a shark, and so their body has the same density regardless of depth. And this density exceeds that of water. This means that sharks have to swim to stay afloat. When a shark dies, it sinks like a rock.

According to the authors, this is why sharks always swim in this wavy fashion, irrespective of depth. They suggest that the more likely an animal is to sink, the more of an energy boost it gets from swimming in this interrupted manner. In this way, these heavy animals (or more accurately, dense animals) have all hit on the same clever strategy for getting the best mileage.

All figures are from the paper. The youtube video is an upload of the supplementary video attached with the paper.

Opening image: There is no E.T. around, by Camil Tulcan. Creative Commons licensed.

The image of a floating woman was taken in Weeki Wachi Springs, Florida (1947) by Toni Frissell. Public Domain.