The morning after a big snowstorm swept through the US northeast, I sat in my car, ready to brave hazardous road conditions and drive to the local coffee shop. My home in New Jersey was outside of the storm’s central path, so instead of piles of snow, we were greeted with a delightful wintry mix of sleet and freezing rain. And sitting in my car, I couldn’t help but be mesmerized by these strange patterns of ice particles forming on my windshield. Here’s what I saw:

As I watched this miniature world self-assemble on my windshield like an alien landscape, I wondered about the physics behind these patterns. I learned later that these patterns of ice are related to a rich and very active current area of research in math and physics known as universality. The key mathematical principles that belie these intricate patterns lead us to some unexpected places, such as coffee rings, growth patterns in bacterial colonies, and the wake of a flame as it burns through cigarette paper.

Let’s start with a simple example. Imagine a game similar to Tetris, but where you only have one kind of block - a 1 x 1 square. These identical blocks fall at random, like raindrops. Here’s a question for you. What pattern of blocks would you expect to see building up at the bottom of the screen?

You might guess that since the blocks are falling randomly, you should end up with a smooth, uniform pile of blocks, like the piles of sand that collect on a beach. But this isn’t what happens. Instead, in our make-believe Tetris world, you end up with a rough, jagged skyline, where tall towers sit next to deep gaps. A tall stack of blocks is just as likely to sit next to a short stack as it is to sit next to another tall stack.

This doesn’t look much like what I saw on my windshield. For one thing, there aren’t any gaps or holes. But we’ll get to that later.

This Tetris world is an example of what’s known as a Poisson process, and I’ve written about these processes before. The main point is that randomness doesn’t mean uniformity. Instead, randomness is typically clumpy, just like the jagged skyline of Tetris blocks that you see above, or like the clusters of buzzbombs dropped over London in World War II.

This Tetris example might seem a bit abstract, so let me introduce you to a guy who takes abstract ideas and connects them to real-world examples. His name is Peter Yunker, and he’s a physicist at Harvard who’s also really into his coffee.

What’s the science behind these stains? Coffee stain typeface by Mark Mustaine

Yunker was curious about what causes these ring shaped coffee stains. In 1997, a group of physicists worked out the reason that coffee forms this ring. As a drop of coffee evaporates, liquid from the center rushes outwards to the edge of the drop, carrying coffee particles with it. The drop starts to flatten. Eventually, all you’re left with is a thin ring, as the coffee particles have all rushed to the edge of the drop. Here’s a (wonderfully trippy) video of work by Yunker’s team, showing what this process looks like.

And here’s the crazy thing. Yunker and his colleagues also discovered that if you replaced all the spherical coffee particles with new particles that are more elongated, sort of like ovals, then you get an entirely different pattern. Instead of a ring, you get a solid blotch. You can see this happening in the video above. 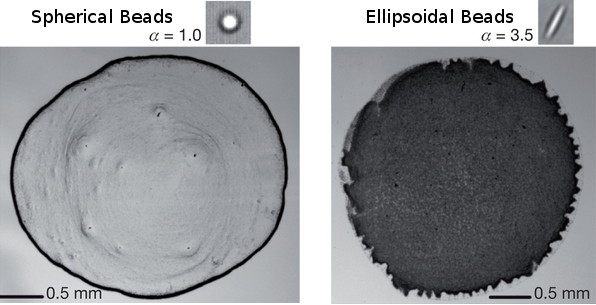 In one case you get a coffee ring, and in the other case you get a solid blotch. So why does tweaking the shape of the particle change the overall pattern of growth? To understand why the oval particles behave differently from the spherical ones, we first need to tweak our Tetris game. Let’s call the new version Sticky Tetris.

It’s a small modification to the rules, but it has a pretty big consequence. In regular Tetris, it takes very many blocks to fill a deep gap, in sticky Tetris, you can fill a gap with a single block. Very quickly, the height differences between towers start to even out. Instead of the jagged, rough skyline of our regular Tetris world, the skyline in the sticky Tetris world is more smooth.

That looks a lot more like the pattern on my windshield!

And here’s the point. While the spherical coffee particles behave like regular Tetris pieces, the oval shaped particles behave just like these sticky Tetris pieces. The moment an oval coffee particle touches another one, it sticks in place. Instead of the jagged skyline from before, you get this Swiss cheese like pattern, an intricate structures of sprawling filaments separated by holes and gaps.

So here we have essentially two distinct kinds of growth processes. On the one hand we have things that accumulate like Tetris blocks, or like particle of coffee in a coffee ring. Here’s an animation of real data from Yunker’s lab showing what this looks like.

On the other hand, we have things that accumulate like Sticky Tetris blocks or like oval shaped coffee particles. The growth of these particles looks like this (again, this is real data).

It’s clear that these are two qualitatively different kinds of patterns.

But it’s also a quantitative difference. Remember that in the Tetris world, you end up with a jagged skyline, while in the sticky Tetris world, the skyline is more smooth. By studying how the topmost layer of particles (the skyline) widens over time, physicists can classify growth processes into different categories. In the jargon of the field, processes that grow at different rates really belong into different Universality Classes. 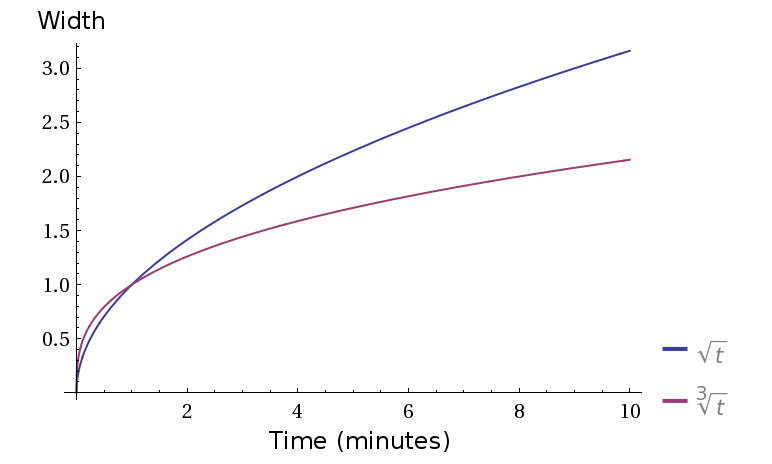 These deep connections between coffee rings and the KPZ equation took Peter Yunker by surprise. In Yunker’s words, “Alexei Borodin, a mathematician from MIT, contacted us after we published a paper on how particle shape affects particle deposition regarding the coffee-ring effect. He saw our experimental videos online and was reminded of simulations that he has performed. I think this is a great example of the value of reaching out across disciplines - we never would have studied this topic without Alexei bringing it to our attention.”

And this sticky Tetris universality class has turned up in all sorts of odd places. One example involves burning paper. A physics experiment in 1997 took sheets of copier paper, carefully lit them on fire from one end, and recorded the flame front as it burnt through the paper. Here’s a sketch of what they saw. You’re looking at multiple snapshots of the flame, as it burns through the paper. 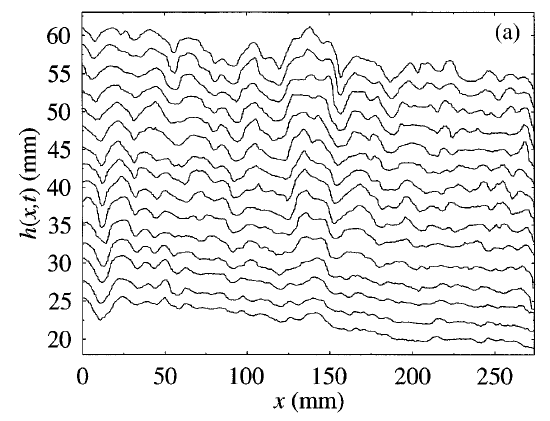 Now, if you think about it, there’s something deeply puzzling here. Bacterial colonies, travelling flames, and coffee particles are all totally different systems, and there’s no reason to expect that they should obey the same mathematical laws of growth. So what’s behind this mysterious universality? Why do such different beasts play by the same rules?

You might have noticed that all these examples look a little, well, fractal-esque. It turns out that the phenomenon of universality is intricately connected to the fact that these systems are each self-similar, like fractals. As I zoomed my camera into the ice particles on my windshield, the overall pattern looked basically the same. The same is true for the front of the flame, the edge of the bacterial colony, or the skyline of sticky Tetris. Here’s an example of a curve that’s self-similar (or scale-invariant, as physicists like to call it).

Fractals of the world, Unite! Self-similarity is at the heart of universality. Image: Wikimedia.

Surprisingly, this self-similarity implies that many of the nitty-gritty physics details of bacteria, flames, or coffee turn out to be irrelevant. According to Peter, “the fractal nature of these growth processes is essential to their universality. In order to be universal, a system cannot depend on its microscopic details, like particle size or typical interaction lengthscale. Thus, a universal system should be scale-invariant.”

Which brings me back to the ice particles on my windshield. They clumped together in these wonderfully fractal-esque patterns that, to my eye, looked a lot like sticky Tetris. I wanted to know if there’s a connection between these ice particles and the KPZ universality class. I put the question to Peter Yunker.

He responded, “These videos are fantastic. I agree with you that the underlying process occurring here appears quite similar to a KPZ process. However, this may be a great example of why it is difficult to identify KPZ processes in real experiments. The rearrangements of these structures have a strong effect on how the interface is developing. Thus, it is very unlikely that this system exhibits the same growth exponents as a KPZ process.”

It seems that the very piece of physics that makes these ice patterns short-lived is also what makes them so hard to study. And so, let me end with a very short video, a tiny meditation on the theme of growth and longevity. ;)

In Mysterious Pattern, Math and Nature Converge. Natalie Wolchover does a really great job of covering Universality from a totally different angle. If you’re not reading her stuff, you ought to!**

Animated gifs of Tetris simulations and coffee deposition data were made with permission from data by Yunker et al. (2013)

The Kardar-Parisi-Zhang equation and universality class by Ivan Corwin - Although very mathematical, this an excellent and clearly written review of the KPZ equation and its connection to Universality, written by one of the experts in the field.