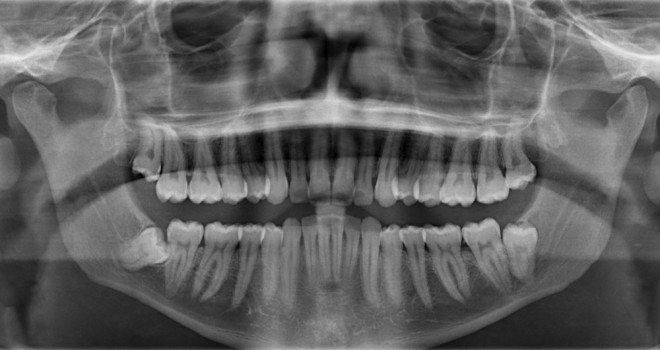 The enamel in your teeth is as brittle as glass, yet built to last a lifetime. Image: Trey Menefee / Flickr

Over the course of your life, each of your teeth will make well over a million bites (or megabites, if you prefer.) The average force imparted by your molars in one of these bites is 720 Newtons (162 lbs), or about the weight of an adult human. That’s a very large number of very powerful impacts, and so you’d imagine that our teeth must be incredibly strong and crack-resistant to withstand such heavy use. And yet enamel - the mineral that coats our teeth - is about as brittle as glass.

Chew on that thought for a moment.

Enamel and glass have a few things in common. They are both very strong materials (they can withstand a lot of pressure), and yet, at the same time, they are both very brittle (they crack easily). But they differ greatly in how they respond to these cracks. When you drop a glass, small cracks form that grow larger and cause the whole thing to shatter. But unlike glass, the enamel layer of our teeth is able to stop cracks dead in their tracks, effectively absorbing their energy and preventing them from growing. You might take your teeth for granted, but beneath the surface lies an ingenious micro-engineered structure that diffuses cracks and saves us from many trips to the dentist.

So how can brittle building blocks build an incredibly tough wall? The answer lies in how these blocks are stacked.

To see what I mean, let’s zoom in to the enamel coating of a tooth. Here’s what it looks like under a microscope. 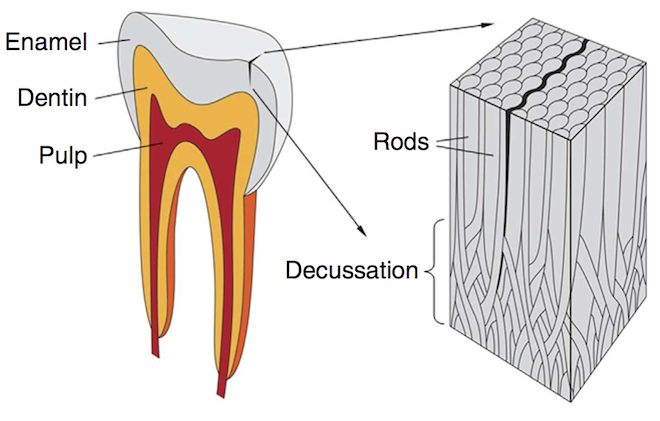 Beneath the surface lies an ingenious micro-engineered structure that diffuses cracks and saves us from many trips to the dentist. Image: Mirkhalaf, Dastjerdi, Barthelat / Nature Communications

The enamel layer on a tooth is really made out of tiny enamel rods, each one about 4-8 microns thick, that are stacked next to each other like a dense forest of trees. In between these rods is a tiny amount of protein (this makes up about 1% of the coating). When you bite into something really hard, tiny cracks develop along these seams between the rods. But instead of growing larger and shattering your tooth like a slab of glass, these cracks are deflected downwards, to a region where these enamel rods get knotted with each other. Like tangled roots of a microscopic enamel forest, this criss-crossing network safely absorbs any damage imparted by the crack. The key idea here is that you can toughen a material by deflecting incoming cracks and forcing them to travel down a more tortuous path. The energy in the crack is now spread over a larger area, and so the crack can do far less damage.

Nature tends to reuse her best tricks. Many tough materials found in nature use stiff building blocks separated by weaker gaps, in a carefully engineered microscopic arrangement that guides any incoming cracks through a maze of twists and turns.

Mother of pearl, or nacre, is found in the outer layer of pearls, and it gives pearls their characteristic shimmering white, iridescent color. Nacre also lines the insides of many mollusk shells, like the shells of oysters, abalone, and nautili. And here’s the really surprising thing – this nacre lining is 3,000 times tougher than the mineral that it’s made out of! 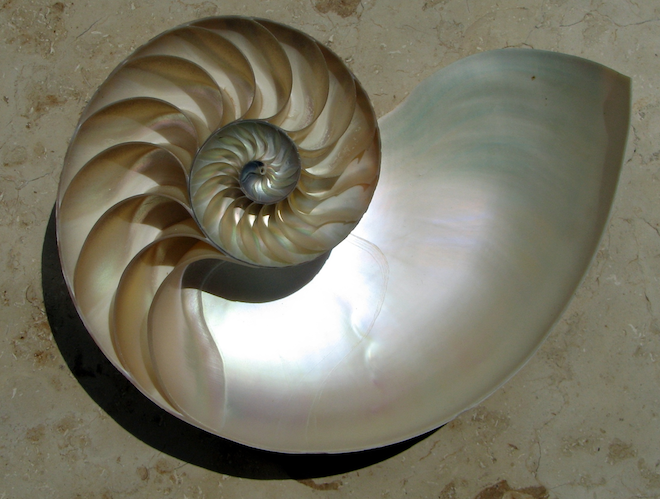 A Nautilus shell cut in half. Not only is this a beautiful example of a logarithmic spiral, but the nacre that gives this shell its strength and shimmer is a micro-engineered material. Image: Wikimedia Commons

If you zoom into a chunk of this nacre, you’ll encounter a structure that looks a lot like a brick and mortar wall - an interlocking pattern of tiny nacre tablets glued together by sheets of elastic biopolymers. 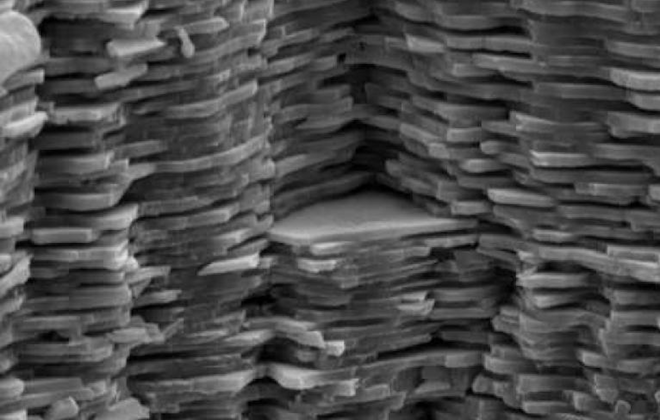 Electron microscope image of the surface of nacre, with a fracture in it. Image: Wikimedia Commons

This interlocking structure is behind nacre’s dramatic 3,000 fold boost in toughness. When a crack tries to make its way through this crystalline shock absorber, it’s deflected along the seams between the nacre slabs. The dangerously localized energy carried by the crack is safely diffused over a larger area (no wonder molluscs line their shells with this amazing stuff.) 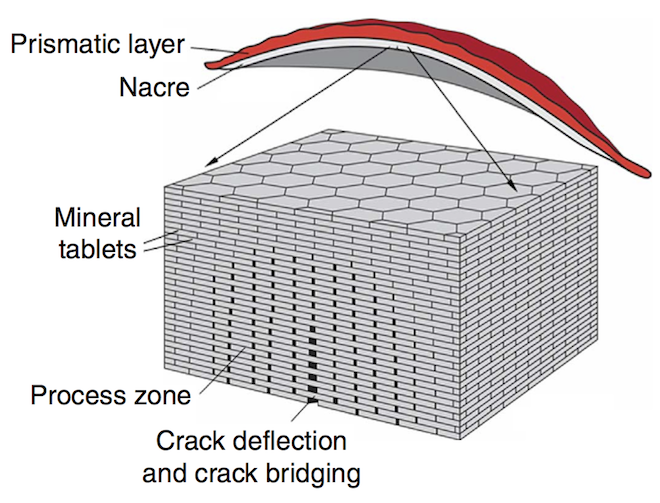 When a crack tries to make its way through this crystalline shock absorber, it’s deflected along the seams between the nacre slabs. Image: Mirkhalaf, Dastjerdi, Barthelat / Nature Communications

In a zen-inspired stroke of engineering brilliance, these materials gain their strength from their weaknesses*. A solid block of enamel or nacre would be hopelessly brittle. But, by introducing weaker channels that can guide and deflect cracks, these materials become far tougher than the building blocks that they are made out of. 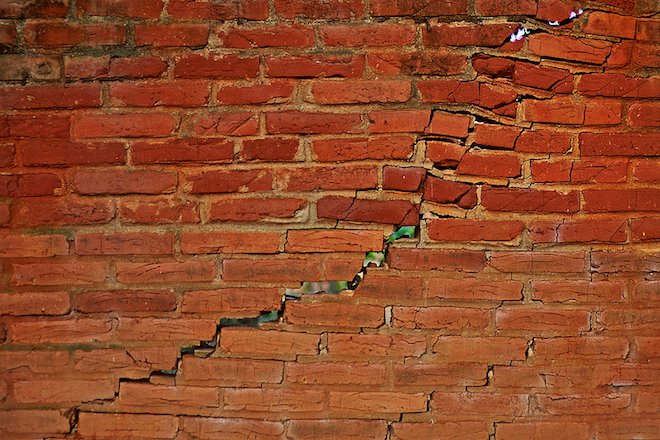 Brick and mortar walls channel cracks away from a direct route and towards a longer maze-like path, and this makes them tougher. Nature uses a similar trick to build tough materials. Image: Rodnei Reis / Flickr

Wouldn’t it be cool if we could take a trick out of nature’s book, and use this idea to build tougher glass? This thought inspired Mirkhalaf, Dastjerdi, and Barthelat, three mechanical engineers at McGill University, to experiment with glass. They wondered what would happen if you could embed these maze-like paths inside a piece of glass. Could these weaker channels deflect and diffuse cracks just like our teeth or mollusk shells do?

So they designed a ‘3D laser engraving’ system where a laser beam is focused inside a piece of glass, and engraves small holes (or ‘microcracks’) inside the glass. By etching many of these small holes next to each other, the researchers could engineer a weak front inside the glass. And when they tore the glass apart, they found that indeed, as they expected, the crack no longer travelled in a straight line - instead, it was deflected down this weaker channel. 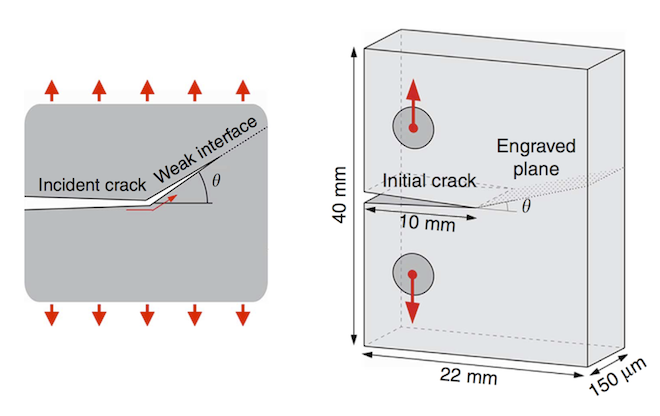 So far, so good. They could now guide cracks to go where they wanted them to. The next step was to turn this weakness into a strength.

And so the researchers came up with a pretty ingenious idea. They etched out a weakened channel inside the glass in the shape of the edge of a jigsaw puzzle piece. Just as it’s hard to slide apart jigsaw pieces that are snapped together, the researchers expected that as the crack travels down this jigsaw channel it would have to work against friction to pull these jigsaw tabs apart. They realized that this idea worked even better if they filled these jigsaw shaped grooves with polyurethane (reminiscent of the biological examples where strong pieces are separated by weakened grooves).

As the crack travels down this jigsaw channel it would have to work against friction to pull these jigsaw tabs apart. Image: Mirkhalaf, Dastjerdi, Barthelat / Nature Communications 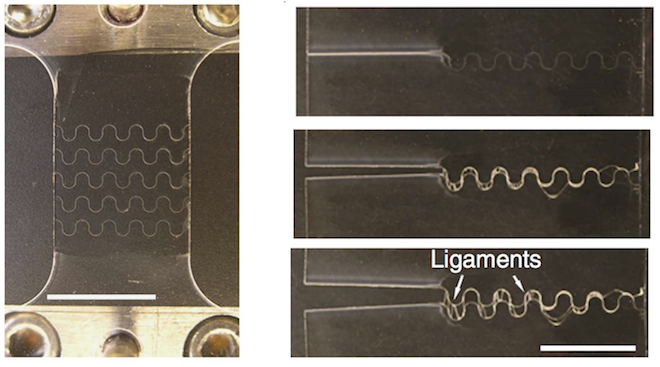 An example of this laser-engraved glass. It takes 200 times more energy to snap the glass, compared to when the curvy seams are absent. Image: Mirkhalaf, Dastjerdi, Barthelat / Nature Communications

The researchers found that this laser-engraved glass was 200 times tougher than regular glass. We frequently use the words ‘strong’ and ‘tough’ interchangeably, but in engineering these are two different quantities. The strength of a material refers to how much pressure it can withstand (either in compression or in stretching), whereas the toughness has to do with how easily cracks can spread. Traditional glass is fairly strong, but not at all tough - it’s brittle. Engineered glasses like tempered glass or Gorilla Glass increase the strength of glass (its ability to withstand high pressure) but not its toughness (its ability to stop cracks from spreading). The laser-engraving technique does the opposite. It gives you a large boost in toughness at the cost of lowering the strength.

Like dental enamel or mother of pearl, the bio-inspired glass developed by these researchers is far tougher than any of its parts. The secret to their success was not to prevent the glass from failing, but to create a situation where it fails well. And just as tooth enamel saves us trips to the dentist, I’m hoping that in the future bio-inspired glass will save the day whenever I drop my phone.

Update (March 11): Here’s a Q&A with Francois Barthelet, one of the authors of this work

Q. What motivated you to work on this project? What role did examples from nature play in guiding your investigations?

A. Teeth, bone and mollusk shells are made of extremely brittle minerals as fragile as chalk, yet they are notorious for their high toughness, which is higher than our best engineered ceramics and glasses. The idea of mimicking the structures and mechanisms behind the performance of these natural materials has been around for about two decades. The typical fabrication approach to mimic these materials has been to assemble building blocks into bio-inspired microstructures. This is much like making a brick wall out of Lego blocks except in this case the blocks are microscopic, so this approach is very challenging. Our idea was to attack the problem from a new angle: start with a large block of material with no initial microstructure and carve weaker interfaces within it. This method allows for a much higher control over the final structure, and also gives material with a very high content of hard material. Glass is the perfect choice because it suits itself well to the laser engraving process, and it is a material with is used in many applications. Also glass is the archetype of brittle materials, and turning its brittleness into toughness makes for a more spectacular result. We are now experimenting with other types of materials as well.

Q. It seems that introducing these laser-engraved channels affects the transparency of the glass. Do you think that in future glass could be engineered with these structures in a way that can still be used in applications that rely on transparency (e.g. smartphone or computer screens)?

A. We are now working on optimizing the infiltration process so the engraved lines become completely invisible. We do it by combining different techniques, and while this is still ongoing we already have very encouraging result, where the engraving line is already much less visible than what you saw in our article.

A. Yes! There are of course many more possible architectures, which makes it very exciting for us because we now have a huge playground to explore. The design we proposed in this paper is essentially two-dimensional. Now we are exploring fully three-dimensional architectures. The “jigsaw pieces” geometry came for two reasons: we needed a “re-entrant” feature to generate locking and we also needed rounded geometries all around, because glass easily fractures near sharp corners.

Q. Are you working on any commercial applications of this work? Do you see these ideas being incorporated into glass for commercial and home use?

Glass is prevalent in many applications because of its optical properties, hardness, resistance to chemicals and durability. The main drawback of glass is its brittleness. Reducing the brittleness of glass can therefore expand the range of its applications: tougher bullet-proof windows, glasses, sport equipment, optical device, smart phones, touch screens. **We have patented the design and the fabrication process, and we are already talking to several companies interested in commercialization. **

*Technically I mean toughness here and not strength. These micro-architectures provide a boost of toughness that is accompanied with a loss of strength. See here for more on the difference between toughness and strength.

How many bites does a tooth go through in its lifetime? This is a fun question to think about (and could work well as a prompt to teach estimation in a math classroom.) I’ll leave it to you to work out the answer. Here are some estimates by others.