As we celebrate the Earth completing another lap around the Sun, let’s take a moment to imagine what life would be like in a world without years - a world that somehow ceased to orbit its star. Admittedly, it’s a strange question, but its’s one that I’ve been obsessively wondering about lately. Not because it’s of any particular relevance, but simply because it’s amusing (at least to me) and fun to think about.

What would happen to us if a giant space finger were to gently stop the Earth in its orbit?

Here, try it out for yourself. Press ’start’ in the simulation below (created by Michael Dubson and the folks at Phet Interactive Simulations / University of Colorado). You should see a planet orbiting the Sun.

Now press ’reset’, and drag the circle with the letter ‘v’ to shrink the planet’s speed . Then press ’start’ again. What happens? (While you’re playing with this, you might enjoy trying out some of the different scenarios in the drop-down menus, and watching the gravitational ballet that ensues.)

If you slowed down the planet enough, you should see it crash into the Sun.

To see why, let’s first remember why things stay in orbit. Every child looking at the sky has at some point wondered, “why doesn’t the moon fall down?” The answer is beautifully simple, yet it took a mind as brilliant as Isaac Newton’s to work it out. (Perhaps a sign of genius is coming up with simple answers to children’s questions.)

Newtons’ response to the child’s question would have been - the moon does fall. It’s constantly falling. Being in orbit is a state of always falling, and always missing what you’re falling towards. In The Hitchiker’s Guide to the Galaxy, Douglas Adams describes the secret to flight. “The knack”, he writes, “lies in learning how to throw yourself at the ground and miss”. As it turns out, this is also a great description of what it means to orbit something. 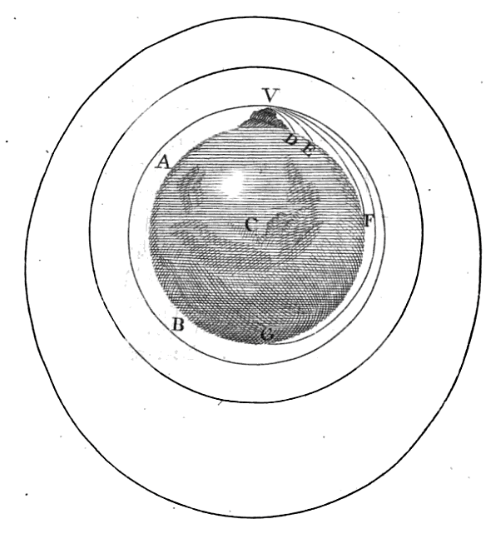 Here’s how Newton explained it. Imagine a cannonball is fired from a height. If you fire the cannonball with more speed, it’ll travel further before it hits the ground. The faster the cannonball, the further it travels.

(Newton’s idea is masterfully explained in this wonderful Radiolab segment.)

So the only thing that makes an orbit different from plain-old falling is having enough speed to miss the thing you’re falling towards. Think dropping a cannonball with zero speed versus shooting it into orbit. And for the same reason, if the Earth were robbed of all of its orbital speed, it would fall straight into the Sun. It would no longer have the speed it needs to miss the Sun.

How long would this ‘Earthfall’ take?

(If you remember some high school physics and want to work out the answer for yourself, here’s a hint for solving it without any calculus.)

I’ll skip the math, but it turns out that we’d have 64 and a half days before we plunged into the fiery depths of the center of the Sun. But don’t worry, we’d be quite dead before that happens.

As the Earth falls towards the Sun, it picks up speed. The further it falls, the more intense the sunlight, and so Earth  starts to heat up.

Here’s a plot of the Earth’s average temperature over these 64 and a half days. 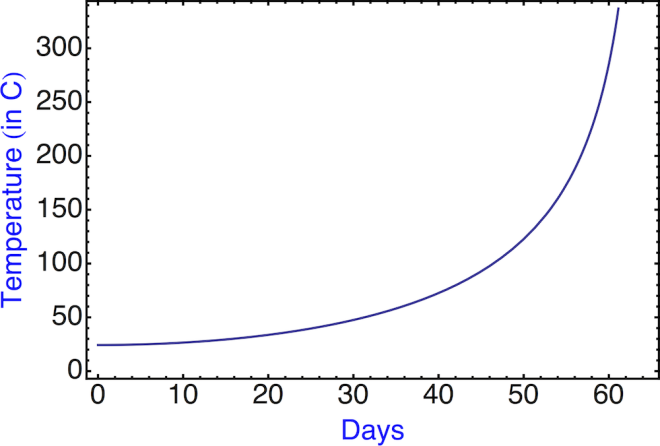 If we zoom out, we see that most of the action happens in Earth’s last day. 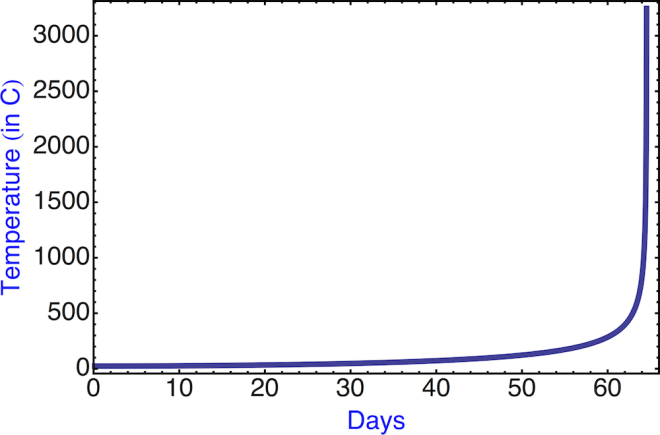 You can see that things are going to get pretty uncomfortable fairly soon.

Let’s take this flight of fancy a step further, and imagine what things would be like on Earth as it descends into the Sun. What follows is my attempt at a science-based play-by-play of Earth’s final 64 and a half days.

We begin our plunge towards the Sun.

After 6 days of falling to the Sun, the Earth’s temperature has risen by about 0.8 degrees celsius. That’s the same amount by which we’ve increased our planet’s temperature since 1880. You may not feel the heat as yet, but you will soon.

The average global temperature has now risen by about 10 degrees celsius, to 35 C (95 F). The planet is now experiencing an extremely intense global heat wave, whose temperature rise rivals the record-breaking 2003 European heat wave. Crops are beginning to fail. 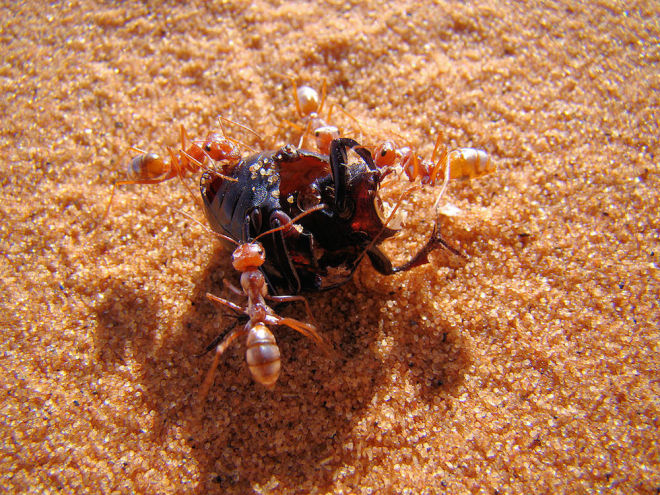 A month in, life on Earth’s surface will look a lot like this. Here Saharan silver ants capture a desert beetle.

It’s been over a month of Earthfall, and we’re now 20% of the way to the Sun. The Sun in unbearably bright and intense, and noticeably larger in the sky. At 58 C (137 F), the average global temperature now exceeds the historic hottest temperature recorded on Earth, which was 56.7 C (134 F) measured in Death Valley, CA.

For most people on the planet, it’s now impossible to stay alive without air conditioning, and the electricity infrastructure is either tapped out or failing. Forest fires are ravaging through the wilderness. Land animals that can’t burrow in to the soil to get respite from the heat are going extinct. The insects, too, are feeling the heat and dying out. The increasing water temperature will cause fish to start dying out, because warmer water holds less oxygen and more ammonia (which is toxic to fish), and because the entire marine food chain would be disrupted and collapsing.

It’s so hot that even the Saharan silver ant, one of the most heat resistant land animals on Earth, can no longer survive the heat (for it can stay alive up to 53.6 C). However, the Sahara desert ant is thriving - it can survive surface temperatures of up to 70 C. As scavengers, these ants feed on the corpses of other creatures that have died from the heat, and there’s now plenty of food to go around. 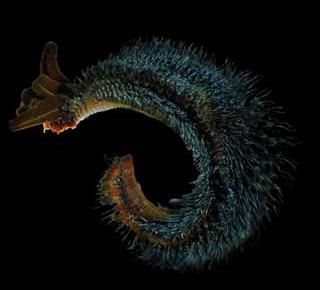 The Pompeii Worm, however, is still holding on. These amazing creatures grow up to 13 centimeters (5 inches) long, and are known to survive temperatures of up to 80 C. It’s thought that they owe this heat-resisting superpower to a protective “fleece-like” layer of bacteria on their backs, which insulates them from the heat. These worms are ”the most heat-tolerant complex animal known to science”, with the exception of tardigrades (whom we’ll hear from soon). 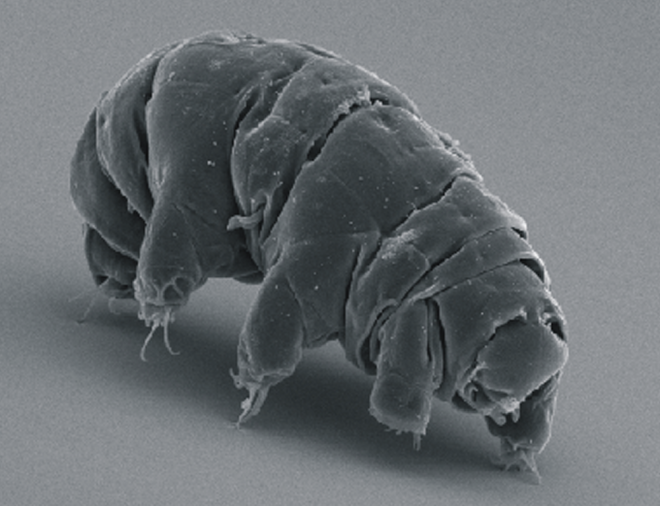 The tardigrades shall inherit the Earth (but not for long)

We just left the habitable zone, that Goldilocks region of a solar system (not too hot, not too cold) capable of sustaining life as we know it.

At 103 C (217 F), the ambient temperature now exceeds the boiling point of water. The Earth’s oceans are boiling. Liquid water can no longer exist on much of Earth’s surface and steam envelopes the planet. Most life on Earth is extinct by now, particularly complex life forms, even the amazingly heat-resistant Pompeii Worm. Hyperthermophiles (such as heat-resistant bacteria) are surviving (perhaps even thriving) deeper in the ocean where the water pressure prevents boiling. Fire tolerant plants are still holding on.

Tardigrades (or water bears) take the prize for the toughest known living things. Heck, these creatures have even survived in the vacuum, extreme cold and high radiation of outer space for a whopping 10 days. Truly, they are among Earth’s extreme survivors.

At this point, the Tardigrades are perhaps just beginning to notice that something is awry. They’re probably bunkering down by suspending their metabolism, curling up and dehydrating themselves into a desiccated state that contains only 1% of their original water. In this dehydrated state, called a tun, they can stay alive and dormant for nearly a decade.

Farewell, dear tardigrades. You outlived us all. Although you can endure a crazily impressive temperature range, from near absolute zero to 151 C, Earth’s temperature now exceeds 160 C, too hot even for you.

We’ve crossed Mercury’s orbit, and are now the closest planet to the Sun, a distinction that we will hold for another week. The ambient temperature exceeds 200 C.

The Earth is now in its final day. Because of the Earth’s immense accumulated speed, and the intense gravitational force of the nearby Sun, we’ll cover the last 7 percent of our journey’s length by 1 pm today. The Sun’s gravity is now so extreme, that it pulls the front of the Earth with significantly more force than the back of the Earth. This differential gravity, or tidal force, is stretching Earth out into an oval shape. Magma erupts throughout cracks and fissures in the planet’s crust.

The day starts off at a balmy 800 C, with the Sun fourteen times its regular size in our sky. By noon the temperature hits 2000 C, more than hot enough to melt rock. Earth’s surface melts into magma.

At half past noon, we’ve nearly arrived. The Sun is so close that it fills most of the day sky. The Earth is crossing an imaginary line of no return called the Roche Limit. This is the point where the tidal forces pulling Earth apart exceed Earth’s ability to hold itself together. As it crosses this critical radius, the tidal effect of gravity rips the Earth into smaller balls of magma and melting rock.

And this is how our disintegrating planet finally meets the end of its journey to the Sun. I hope you enjoyed the trip.

P.S. Before you begin to fret about Earth falling into the Sun, consider this. Earth’s speed in our orbit is about 30 kilometers/second. That’s a lot of speed that we’d have to shed for the scenario in this blog post. It would actually be (very slightly) easier for the giant space finger to give us a shove and increase our speed to 42.1 kilometers/second, the escape velocity at which Earth would break free of the Sun’s gravity and become a rogue planet. I really did start off this paragraph trying to help. Sigh.

To calculate the temperature of the planet, I used the rule of thumb for the Sun that the equilibrium temperature of a planet is 250/sqrt(d) where d is the distance to the Sun in astronomical units. You can find a derivation of that here. Additionally, I used a simplified model of the atmosphere as a single layer to account for the greenhouse effect - this boils down to multiplying the temperature by the fourth root of 2. I used Mathematica to numerically solve for the relation between time in Earthfall and distance covered by the Earth. Combining this piece with the above relation of temperature vs. distance, I arrived at the plot of temperature versus time in this post.

There are tons of reasons why this calculation is a massive simplification - for one, the greenhouse effect will increase considerably as the melting Earth’s atmosphere probably contains way more greenhouse gases from all the burning carbon. But, hopefully, this post should give a reasonable order-of-magnitude estimate of life (and lack thereof) during Earthfall. Also, I’m totally sweeping under the rug the force that would arise during Earth’s deceleration as it’s being slowed down by the giant finger, because life’s too short.